Can anyone tell me the part number (or name!) of the black plastic ring that surrounds the seat belt mounts on GTs? 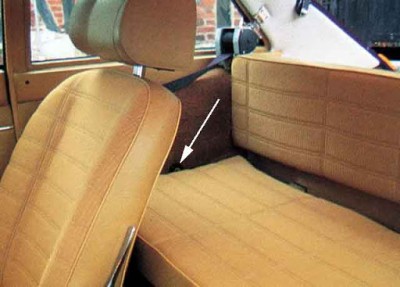 Hi Tom, since no one else has provided an answer, I'll throw this in!

I believe (rightly or wrongly) that many/most seatbelts of this era were fitted at dealers, or at least we're simply "off the shelf" units commercially available. That being the case you would probably be best to identify the manufacturer of your belts and contact the manufacturer or someone who can supply classic belts.

From what I recall of looking at MGs in the 1970's, it seemed that there were several different seat belts fitted, so probably not on the MG inventory.
They didn't have to be worn back then of course, but had to be fitted.
My 72 BGT had the magnetic type fastening belt, Kangol I think, but I may be wrong. Long since replaced of course, but I did like the design.

Thanks for the replies.

I have asked Moss but have not yet got a sensible response.

A better picture is attached (found on the net - from a rubber bumper GT). 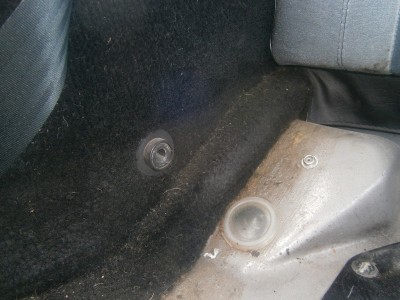 Tom,
I've had a look at this mount on my 72 BGT, and sure enough there is a black plastic "washer" under the bolt. Doesn't really do much for the aesthetics though!! I have never used that for the main seat belt anchors, although I did use them for fitting a child seat many years ago.

I also dug out my original Kangol magnetic seat belts and found they did have a blue/silver BL metallic sticker on each latch. This does raise the possibility that they were fitted in Abingdon perhaps ( my BGT has several BL stickers and badges from that era).

The top anchor point on the wheel arch has always been used as the rear anchor for the main seat belts.

Hi Tom
I've been looking through my collection of seatbelt fittings, and I have many nylon washers that are white rather than black as Ian mentions. I believe these one of the methods used to ensure the end of the belt mountings plate can rotate when bolted up to the car. I also have found a cap (finisher) in black plastic that covers the bolt head to make it look neater and be more Friendly in an impact. I've taken a picture of this along with a bolt
[attachment=0]Seatbelt bolt cover.jpg[/attachment]
If you look at the bolt you will see that this is threaded all the way to the head, and I think the nylon washers are used to ensure the mounting plate has some movement after tightening if this type of bolt was fitted. Also notice that the bolt is chromed so wouldn't actually need the plastic cover. Perhaps BL stopped chroming the bolts and provided a cheap plastic cover to make the neat.
According to Clausager, static seat belts on UK cars were dealer fitted until 1971. after that they were factory fitted and later were replaced by inertia reel belts. If the dealer fitted the belts they would have most likely used BMC branded ones as they probably got these at a good price - which they wouldn't have handed on to the customer!
Like Vic I can't find any fixings listed separate to the seat belt kit. 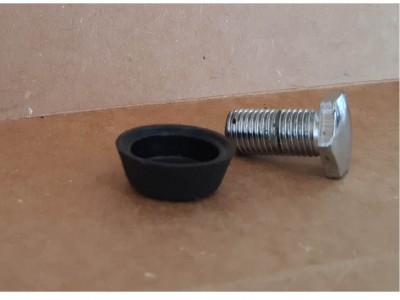 Pete, regarding the bolt - I recall that the seat belt anchor bolts in my BGT "bottomed out" whilst being torqued? I confess I haven't been out to check them (it is Easter Sunday after all.......).
The plastic or nylon washer would ensure the fastening could swivel without friction or chaffing of the metal.
Does that sound right?

Happy Easter to everyone by the way!