It has been reported this morning that Sir Stirling Moss has passed away after a long illness. During his career he drove and excelled in a multitude of cars, and different formulae. although he narrowly missed out on becoming f1 champion in 1958, he was the first driver to win his home Grand Prix (British GP at Aintree in 1955). He won the demanding Mille Miglia also in 1955 in a record time of 10hr 7m 48s (average of 98mph) which was never beaten. He drove single seaters, sports racing cars - even Austin Healey Sprites at Sebring. He set several international records for MG in EX181 in 1957. He also drove rally cars, for Sunbeam in the 1950s winning an Alpine cup for three faultless performances in successive years, and later contested the Pirelli Marathon in MGBs prepared by Brown and Gammons.
A real allrounder, a gentleman, a formidable opponent, outspoken, and a man very generous with his time for a sport he loved. He will be sorely missed by all.
The picture below is from the 1990 Pirelli Marathon, where Sir Stirling (on the left) came third, with Paddy Hopkirk (Centre) 1st and Ron Gammons (right) 2nd. the MGBs are Ron Gammons JYH 770D, and Sir Stirling used Gerry Brown's car ADD 880B.
[attachment=0]1990 Pirelli Marathon.jpg[/attachment] 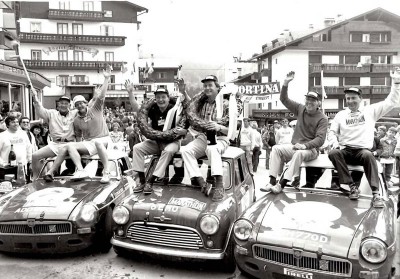 Out of interest- are those both roadsters with hard tops ?

Yes. Both Roadsters with hardtops. Ron's car is Tartan Red with white hardtop. Gerry's car is British Racing Green with white hardtop.
Here is a picture of Gerry's can on my drive with my red roadster a few years ago when he came up to our natter to do a talk about International Historic Rallying. Gerry is in the background sorting the trailer prior to loading the car for the return trip to Suffolk. The tow van and trailer with car used less fuel than driving the car to and from Staffordshire.
[attachment=1]Gerry Brown MGB 3.JPG[/attachment].

I also drove the car briefly and my impressions are attached:
[attachment=0]Driving Gerry Browns MGB.pdf[/attachment] 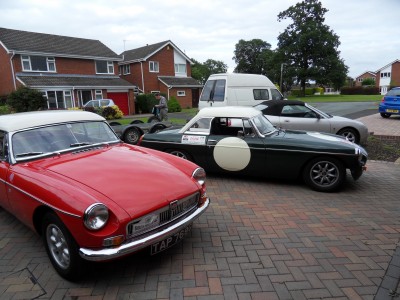