A bit of light relief. What's the largest engine capacity that anyone has driven?
I've ridden or driven vehicles with 1, 2, 3, 4, 5, 6 and 8 cylinder engines but the one with the largest capacity engine had a single cylinder 2 stroke diesel engine of 5 litres.
1977 Stage 2 MGB GT
1975 SWB Series 3 Land Rover with a later 2.5 petrol engine
Top

That must have been a boat

Many years ago in Boston. I ordered a sub-compact but it was all they had left when I went to collect.

Sounded good. About the only good thing about it.

Well Vic, if it wasn't a boat, I would have to guess at something agricultural? A Triumph TR possibly, but they had 4 cylinders

Best guess would be a Field Marshall tractor, or perhaps something similar from Europe. Most of these had engine capacities greater than5 litres though?

P.s. my submission is a mere 2.8 litre V6 which I owned in a Volvo 760 saloon. Although not an MG or even British, it was a car I greatly enjoyed having.
1972 BGT, Blaze, Navy trim, recessed grill
1961 Midget, 948cc, Clipper Blue, Blue trim and weather gear
Top

I think the largest capacity engine I've driven was 3.4 litre Ford Diesel that powered our coach conversion to race car transporter. Sadly I don't have any pictures of it but it was like this but without most of the seats. 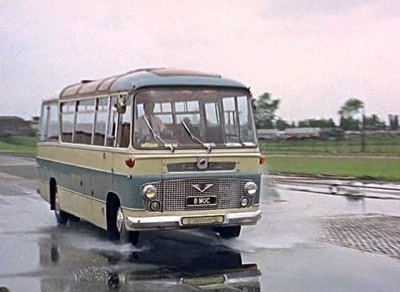 The back had been cut off and doors fitted, the were 4 seats plus the driver, a galley kitchen and a big bed across the full width of the bus, but high up. It carried 2 MG T-Types racers inside (Mine and Nick Taylor's) at 15mpg. Maximum speed ever reached was 72 mph on the A1 between Boroughbridge and Weatherby roundabouts accompanied by much black smoke - similar to a B52 taking off! It was registered as a motor caravan and so could be driven on a car licence, and it didn't need an MoT as it was too big.

I suppose better and much faster was the MGC GT I had so 2912cc with long gearing so it couldn't reach maximum rpm in overdrive 4th and would cruise all at 120mph. In fact I used to assume an average speed of 100mph on motorways when estimating what time we would get somewhere. A really great GT car. Not a sports car and was grossly under estimated for years.
Pete
1969 MGB Roadster
2011 MG 6 TSE Magnette
2007 Mercedes SLK
Plus 32 other cars since 1965
Top

One of the 6 cylinder vehicles I drove was a mate's MGC GT, BWE 997H. I was offered it for £400 in 1975 but it needed king pins which were unobtainable and we'd just moved house.
I don't think it's on the MGC register and the number isn't on the DVLA site. I wonder what happened to it.
1977 Stage 2 MGB GT
1975 SWB Series 3 Land Rover with a later 2.5 petrol engine
Top

Vic - I had to pay more for my MGC around the same time, but it was in fine fettle.
I had been running my MG TC on Formula Vee tyres for 1975 and 76, which were ultra sticky but very low profile. At the end of 1976 they were banned at the T-Register Drivers meeting, and I had to revert to L section CR65s. Initially in late 1974 a set of 4 tyres cost me £40 in Dunlop's end of season sale - with a warning from Dunlop that the car was too heavy to race on them. I promised to only use them for sprints and hillclimbs, but of course...
I had to replace one of them after that frenetic T-Type race in 1975 MGCC Silverstone, when I got my nearside front wheel stuck between the rear wing and chassis of Gerry Brown's car going round Woodcote. At the end of 1976 I advertised the 4 tyres for sale at £40 and they were snapped up by Mike Duncan the Morgan racer (and dealer) in Stourbridge. When he collected them, he came in a Mineral Blue MGC GT BAB 916H. After we had finished the deal for the tyres, he mentioned the MGC was for sale at £800 and he offered me £550 for my MGB as part exchange for C. The MGB had a dented front wing, an overdrive that kept dropping out, wheels with loose spoke and a really tatty hood. I had paid £350 for it! The deal was done and a couple of days later I owned a very nice MGC GT. I've often thought who was conning who over all this dealing!
A couple of years later the MGC was stolen from a hospital car park whilst I was visiting my terminally ill Gran. The insurers gave me £850 for it.
So a really good car!!!
Pete
1969 MGB Roadster
2011 MG 6 TSE Magnette
2007 Mercedes SLK
Plus 32 other cars since 1965
Top

Pete and Vic
I too had a CGT in the mid 70s reg WPX 3F sold for £400 (about the going rate) in good order but not of heard of since.
Known affectionally as Wilders Posh Xpress (WPX) It too does not feature in the C Register or DVLA records

I have been quite lucky with big engined cars - regularly in the past driving a 1965 Bentley S3 Flying Spur and more recently a friend's DB11. The Bentley could certainly go if you pushed it as did the fuel gauge downwards, the DB11 could deliver exceptional acceleration or be driven like shopping car,so docile.
Bentley S3 Flying Spur test Drive https://www.youtube.com/watch?v=-JWsZW9BMjQ
George
George Wilder
1965 MG MGB Mk1
1995 MG RV8
2005 MG TF 135
1959 BSA D7 Bantam
Top
Post Reply
13 posts