Hi All, even more, confusion.

Been following your comments. there has been a selection of different distributor setups for the 1800 engine to meet a variety of emission requirements especially those dictated by the US. One thing to remember the cars are 40+ years old and though the distributor has the correct stamping it does not mean the internals are correct. This has happened to me where the advance weight carrier had been changed by PO and the vacuum unit was also incorrect.
Had a discussion with the Distributor Doctor and he supplied me with new balance weight springs and new vacuum unit suitable for my engine state of tune. Also spoke to Peter Burgess who more often than not dispenses with the vacuum and just blanks off at the manifold and vacuum unit. I do have access to the list of many curves but the only true way, if you are looking for maximum efficiency, is to have the timing setup on a rolling road.
Top

Michael and Mnripley.
That's what I have found in the workshop manual and the photo of the Jubilee engine bay in Clausager confuses the issue further as it shows the vacuum advance from the front carburettor yet Paul Scott's 1975 B has the take off on the manifold. Peter Burgess states in his book that all rubber bumper B's have the take off on the manifold.
I know there were originally 4 different type numbers of HIF4 fitted, 2 type to chrome bumpers and 2 to rubber bumpers. The change of the rubber bumper was when the radiator was moved forward in September 76. Now, did the previous rubber bumper HIF's have the vacuum take on them. I'll ring Burlen quoting the type number.
Clausager is absolutely no help. The 2 major changes in the MGB, first from chrome to rubber bumper and then from September 76 make no mention about when the vacuum take off was moved from carburettor to manifold. Obviously the chrome bumper HIF's have the take off on the carburettors.
Clausager gives less than a page to ignition change overs, referring to the workshop manual which is confusing.
I'll get there. Thanks for contributions.
1977 Stage 2 MGB GT
1975 SWB Series 3 Land Rover with a later 2.5 petrol engine
Top

Hi Vic
Clausager may be right. If you type into Google and type in "MGB GT jubilee restored to factory spec" there are pictures of a guy who has been restoring a Jubilee car .If you scroll down and zoom in, there are 2 pictures on of the engine bay and one of the carbs. The engine bay one shows the vacuum hose going to front carb and the carbs picture shows the vacuum tube take off point on the front carb. The article shows the car is owned by a Mr Alistair Shaw who according to he article is a member of the MG car club and possible on the Mgb register. Maybe either of these could give you his contact details and he could look at the number on the Distributor for you.
Hope this helps.
Mike Barclay
Top

This picture is from a 1975 LE GT sold by Mathewsons, the car had only done 112 miles from new so the layout is presumably as left the factory. 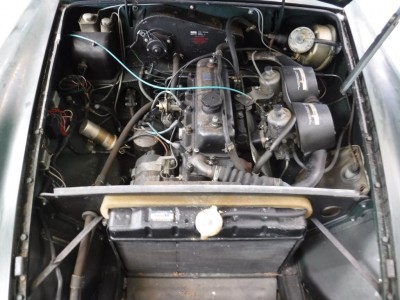 I contacted Burlen today. There are two types of HIF fitted to rubber bumper B's and neither FZX1001 fitted to earlier versions and FZX1229 from September 76 onwards had a vacuum take off point on the carburettors so the Jubilee in Clausager must have had an earlier pair of HIF's fitted at some time. The picture shows clearly the manifold take off point shared with the brake servo as blanked off. The manifold is the same as the later rubber bumpers.
I've drawn the conclusion that all rubber bumper B's had the vacuum take off on the manifold and 41610 distributors when they left the factory.
Thanks for all the input.
As regards rolling roads there is one local to me but they won't have a clue about proper cars with real carburettors so I will just have to guess until I can find a rolling road operator that knows.
1977 Stage 2 MGB GT
1975 SWB Series 3 Land Rover with a later 2.5 petrol engine
Top
Post Reply
17 posts