It never rains but it pours!

Checking the cylinder compressions. All plugs out. Checking No1, I noticed drops of water coming out of No3. The car has been losing water recently, so off with her head! All compressions 160 to 170 psi.
Nothing obvious except that some head nuts were not as tight as others. Mixture looks about right - exhaust valves pinky brown.

Question. Is it possible to tell whether hardened valve seats have been fitted? See photos. No3 with and without exhaust valve.

If the valve seats haven't been done, it's off to the machine shop for a valve job, and a skim. 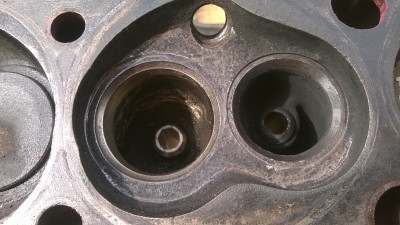 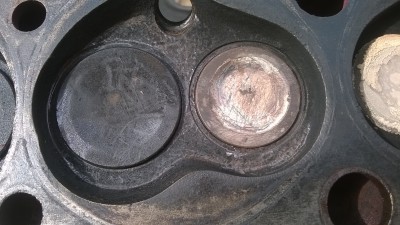 Hi Dave,
I'm afraid i can't really be of much help on this aspect - My head has not been removed since i have had the car from new! When i removed the exhaust manifold , i decided to not disturb the head , although at the time did check the torque settings of the cylinder head nuts & the valve clearances. I believe that many have experienced hairline cracks in between no 2 & no 3 cylinders towards the top of the block, but don't know if this is the problem you are experiencing.
Cheers,Charles
1980 Roadster
Top

Dave, I don't think there are hardened valve inserts fitted. Anyway if you're having the head checked that's the time to have them fitted.
1977 Stage 2 MGB GT
1975 SWB Series 3 Land Rover with a later 2.5 petrol engine
Top

Dave,
difficult to tell from the photos, the inlet valve seat looks a possibility for an insert, but it's usually the exhaust seats which are done! Unless there has been a lot of fine finishing/polishing you should be able to feel the edge of the insert in the valve throat. Just feel for a regular ring with your fingernail in the valve throat.
Both inlet and exhaust can be fitted with inserts to remedy excessive wear or damage, but for unleaded fuel it is usual just to do the exhaust seat
Ian F
1972 BGT, Blaze, Navy trim, recessed grill
1961 Midget, 948cc, Clipper Blue, Blue trim and weather gear
Top

Can't feel or see any evidence of new vale seats, so I'm fairly sure that I don't have them. All the valves, seats and guides fine after a light rub in.

I've been around the head and block with a straight edge and 2 thou feeler gauge, and found nothing untoward.

Charles comment about cracks got me thinking. I've had a good look around the head and the block with a loup? and nothing visible. To spend a load of dosh on the head only to find that the block is cracked doesn't appeal.

So I'm going to make a good job of fitting a new head gasket, and try it again. If it works, fine. If not, I'll have to do some serious thinking.

Any flaws in this thinking?

Sounds OK to me!

Thanks Ian. The head gasket that I took off was blackened on both the copper and steel sides in several places, so fingers crossed the new gasket will fix it.
1978 MGB GT
1931 Austin 7 RM
1955 Standard 10
1972 Ford Cortina
No modern!
Top

Check the areas between the bores on the head and the block, particularly around bore 3
Look for any slight sign of leakage/erosion/burning between the bores. May need a light skim of head or block if anything spotted.
Just mentioning this as you have found a bit of blackening on the gasket.

I understand that some incorrectly tighten the cylinder head studs (not the nuts) more than just finger tight and hence break into one of the water channels of the block.
Hopefully a water tight gasket & some suitable sealant on the threads of the studs might prevent water ingress if this has anything to do with your problem. Stud holes may need slightly countersinking if the block surface has been affected round the edges of the holes that the gasket can't seal.

Looking at the pictures Dave originally posted, I beg to differ about his cylinder head.
I think it has had hardened exhaust valve seats fitted. This is evidenced by the ring around the exhaust valve seat, which looks like the outer edge of the insert to me. It is easy to check if this is so. With a fine needle file make a light scrape on the bottom edge of the valve seat down the throat of the port. If it scratches easily it is the original cast iron. If the metal can't be scratched easily; if it a hardened seat, which is made of a Cobalt alloy called Stellite, it won't be scratched. Make sure you don't scratch the valve seat in the area the valve sits - see picture below. If the seat is an unleaded insert, then it hasn't been fitted correctly as it is recessed into the head too far, but this may have been done to compensate what I think has happened to the inlet valve seat, which I suspect is very worn as the valve appears to have become recessed into the seat.
In the early days of unleaded fuels it was quite common for both the exhaust and inlet seats to be replaced, which often wasn't necessary if the inlet seat was in good condition.
I've take Dave's first picture and added comments to clarify the above[attachment=0]Slide1.JPG[/attachment].
If it is suspected that the head is cracked then most engine reconditioners will be able to Magnaflux test it for cracks. I don't think this is likely as Dave found some of the head nuts weren't as tight as others, so most likely the loss of coolant is due to a weeping head gasket. If it was cracked and losing coolant the crack must be into the water ways, and the cylinder pressure would pump the coolant past the rad cap pretty forcibly!
Hopefully a replacement head gasket and correctly torqued down head will cure the coolant loss problem, and other work can be done another day. 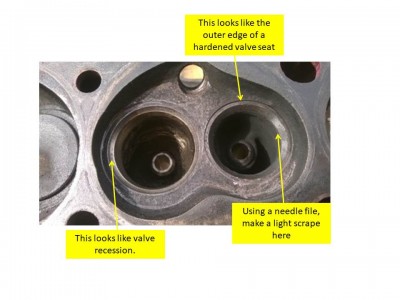