Peter. I thought that about the valve seats at first, but on the Hammer and Spanner site, there are pictures with the same 'ring'.

Anyway too late now. Head back on and torqued down. Retorque tomorrow, and then start her up and see what happens! Amazingly, the whole job went like clockwork!

Fingers crossed it's ok now.
I think the head will have done remarkably well to have valve seats that look like they do in your pictures and not have been converted to unleaded at least some 20 years ago. How many miles it has done?
If you are unsure if it is unleaded, you should used a lead substitute additive. Until I modified the head on my car now, I used Castrol Valvemaster which I have found to be the most economical as you add 25ml to every 25l of fuel, whereas some other products you empty the whole bottle to a tank full. Like many others on this forum I use, and recommend the use of, Super Unleaded from one of the main companies -Shell, BP, Esso, Texaco etc.
Pete
1969 MGB Roadster
2011 MG 6 TSE Magnette
2007 Mercedes SLK
Plus 32 other cars since 1965
Top

I agree with Peter that it looks like there is an insert in the exhaust side, not so sure about the inlet. I didn't think that inlet valves recessed. On 'A' series the factory only ever put an insert in the exhaust side right up to the end of production, well into the unleaded era. I seem to remember though that Peter Burgess put inserts in both when he did my head. A long time ago in the 1970's, I took the head off my Midget and found that the exhaust valve seats either end of the head had burnt out and I had inserts put in them. I understood that they were hardened steel but not anything as exotic as Peter suggested.
As one of the other contributors has said, you should be able to feel the interface between the insert and the machined recess it sits in with you finger nail. Of course people to grind away the step when they gas flow heads.
1971 MGB roadster & 2006 MGTF
Top

In Peter Burgess' book he does mention that Valve seat inserts can be fitted to the inlets if the seats have been recut too many times, resulting in the valve sitting too far into the throat of the inlet port.
This will give problems with the valve gear geometry as rocker arms will be at a greater angle than is desirable when the valve is closed. It can be quite time consuming correcting the valve stem heights to correct the angles, and it is probably quicker to put hardened inserts into the inlets at the same time as doing the exhausts.
This probably explains why Paul had them fitted by Peter Burgess when he worked on the head.
Also I think in the 1970's the inserts were cast iron, as I had several fitted to my racing XPAG engines over the time I raced the TC. They had the problem that if they were too tight when fitted they cracked when hot and if too loose the fell out when hot. You always knew which problem you had depending on how many bits were in the sump.
Obviously cast iron ones would not cure the problems caused by the lack of lead in the fuel these days, so I think this prompted the move to Stellite. Some more research this evening has reminded me of 'Sintered' valve seats. These are created from a mixture or metals and compounds forced into mould under high pressure and temperature, and are mostly fitted to modern engines where they have to last for at least 150,000 - 200,000 miles without failing. In fact modern engines last the life of the car and we are not too far off with oil technology meaning no oil changes in that time.
I'm fairly certain the Cooper S head I had converted a few years ago was fitted with Stellite seats, but I can't be sure if that is true for my MGB head without contacting the machine shop.
Pete
1969 MGB Roadster
2011 MG 6 TSE Magnette
2007 Mercedes SLK
Plus 32 other cars since 1965
Top

Not much to report. All back together despite crap weather, and running OK.

There's a weep from the thermostat housing joint despite truing up the aloy cover joint face. Very minor, so I will leave this for a while.
1978 MGB GT
1931 Austin 7 RM
1955 Standard 10
1972 Ford Cortina
No modern!
Top

That's good Dave! Don't forget to re-torque the head nuts! For the thermostat housing I would suggest a smear of Hylomar on all surfaces. I usually find the cork thermostat gaskets difficult as they tend to squeeze out of the joint. I prefer the gasket paper ones which stay put!

I have to say that I have not come across the insert scrape test before. but even Peter Burgess told me that it's not easy to be able to tell if a head has been converted...even for him. i am not sure it's so straightforward, especially from a photo.

i do hope you lapped the seats. they should be a nice dull grey, uniformly. this head does not have unleaded seats. 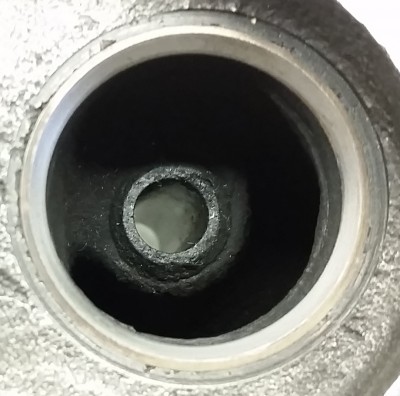 David - I had trouble with a weeping thermostat housing, turns out the leak was up the studs, they * directly into the water jacket of the head. The solution was to ditch the spring washers and apply gasket goo to the plain washers under the head of the nuts.
1971 MGB roadster & 2006 MGTF
Top

The car is up and running again now, despite working outside and rubbish weather!

Valves lightly lapped, No. 4 needed a bit more - all ccompressions now around 170.

No oil used. No water used - no pressure on header tank overnight. The slight seepage from the thermostat housing was up a stud, and Paul's cure has fixed it.

Oil pressure still a bit worrying - 45 on tickover hot, and just over 50 at 40mph - will investigate when No1 son vacates his Mk3 Cortina from my workshop!

Thanks again for all the help given on here - wonderfull resource.

Just for information, I bought my MG TC in 1963 for £75. I've had several B series powered cars over the years 1588 TVR Grantura, 1622 Elva Courier and various saloon types, but I reckon the last one I had must have been 30 years ago, hence I'm back on the learning curve.

Edit. Amazing swapped oil filter for a Mann one as suggested on here. Pressure back up to 70! I have to say I was getting disillusioned with the car, but things are are coming together now.