So the engine and gearbox are out of the car and decided to take the gearbox off so that i could decrease and clean it.
Upon removing it i noticed that the clutch seemed pretty new which i was very pleased about. I removed the clutch and the plate and that looked pretty new new also. However, i noticed that on the side of the plate that interacts with the flywheel that there was a pretty large mound running through the centre of the friction pads. I then looked at the flywheel and noticed that there is an indent on the centre of the flywheel also. Im assuming that at some point in its life the car was driven for a considerable time with a worn clutch plate therefore rubbing on the rivets instead of the friction material.
My question:
Do you think this is repairable? Or is there too much material that would need to be machined off to make it flat again? (see the attached images) 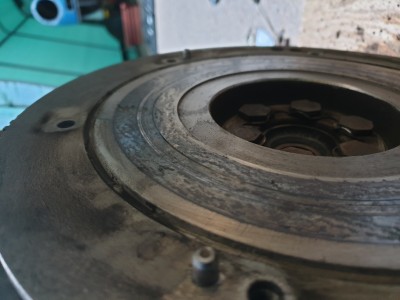 Hi Harry. I had exactly this type of wear on the clutch of my BGT in the early years of my ownership. The clutch began to slip and by the time I changed it, the wear was as you describe. I recall that I just replaced the friction plate and put it all back together, reasoning that wear would soon take up the gap in contact (cash was tight in those days!). Worked fine for many years.
However, I'm not recommending that you follow the same path! Your flywheel surface looks pretty rough from the photo and could benefit from a clean up. Take advice from a competent machine shop, I would be surprised if that wouldn't clean up OK. Then a new clutch plate at least I think?
Ian F
1972 BGT, Blaze, Navy trim, recessed grill
1961 Midget, 948cc, Clipper Blue, Blue trim and weather gear
Top

While the engine is out it's best to replace all clutch components and the thrust bearing.
1977 Stage 2 MGB GT
1975 SWB Series 3 Land Rover with a later 2.5 petrol engine
Top

Hi Harry
I agree with Ian's prognosis. The car must have been driven for some time with a worn and slipping clutch to get that amount of wear. Any engine reconditioner will be able to reface the clutch side of the flywheel, but they will have to do it from the outer edge (where the ring gear sits) across to the centre recess, otherwise the clutch will always slip because the cover assembly can't clamp the friction plate fully. To get it machined, either you will have to remove the cover assembly locating dowel pegs which is not always easy or if you leave them in for the machine shop to remove, make sure you get them back! Use new bolts and tab washers when you reassemble it. The flywheel is quite thick (and heavy!) and cleaning it up will not diminish its effectiveness. Taking weight of the flywheel will improve the acceleration of the car. As a rule of thumb, for every 1lb taken off the flywheel the car 'appears' to the engine to be about 12.5lb lighter, so it does have a dramatic effect if a lot of metal is removed, but for a skim it is unlikely you will notice the effect, especially if the next time you drive it the engine includes the mods. outlined in your other emails.
If you are planning on doing work on the engine itself it is worthwhile having at least the rotating assembly (Crank etc) balanced, which most machine shops can do. The flywheel and clutch are part of this job so it would make sense to leave the flywheel skim until then.

Incidentally, if you add to your forum profile a general location, people on here might be able to recommend good machine shops in your area. For personal security don't give a detailed address and postcode!
Pete
1969 MGB Roadster
2011 MG 6 TSE Magnette
2007 Mercedes SLK
Plus 32 other cars since 1965
Top

Thanks for the replies!

Peter - Yeah I can't image how one world drive a car to the lengths that to do that much damage! Okay brill thank you for the advice, I didn't think about machining the entire surface but yes that makes sense! Any idea how the dowels come out?
When i get it machined I will definitely ask them to lighten it too as i think its definitely worth it! The only problem is that i cannot find any automotive machine shops in my area. I may just have to look harder! I will update my location.