I wonder if anyone can help with what might be a very simple electrical question? I'm wiring up my new HRW and have found that it's only getting 8 or 9 volts at the positive terminal. My knowledge of voltage drop through a circuit is pretty non-existent, so is this normal? If not, what might be awry?

The back-of-an-envelope note below shows the voltage dropping progressively round the circuit after the switch. I've cleaned all the connections. 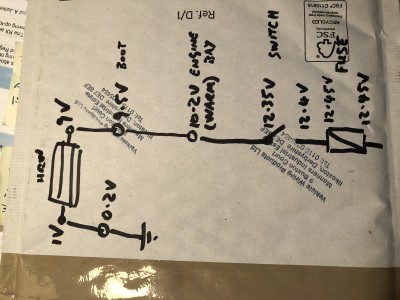 Hi Tom,
You have Warm on a connection point.

Does this mean the connector is hot!!

If it is hot, that will be from the connection being loose or corroded. My guess is the 4 way or 2 way connector has failed.

Disconnect at that connection pulling the bullets out. If you can get the rubber sleeve off you will most likely find the internal part has crumbled.

Replace the female part & clean the bullets & re-assemble with dielectric grease. It may also be better to add a relay into the circuit, just like the headlights to stop power loss.

Hi Tom
After looking at your drawing I think Paul is spot on with his diagnosis. There is an electrical formula called Ohms law. Basically V= IxR where V==Volts I= current and R= resistance. So any high resistance joint will cause a volts drop. To prove this try disconnecting the HRW at the tailgate then measure the voltage between the Green and black electrical feed and earth. If it reads around 12 Volts then you have a high resistance joint somewhere. Looking at your picture, as Paul suggest start with the bullet connector in the bunch of wire near the fuse box. Find the correct wire (Should be green and Black according to my diagram) pull the wires out of the bullet connector and check for corrosion of the bullet connectors on the wire ends and the actual black bullet connector.Alsso make sure the connection is mechanically tight when reassembled. Then I would also do the same at the tailgate end and check the HRW earth connector making a good connection to the body. Hopefully this should sort things out.
Best regards
Mike Barclay
Top

Thanks for the suggestions. However, I've worked out that much of my confusion was due to the difference between open-circuit voltage and closed-circuit voltage.

When the circuit is open (e.g the bullet at the tailgate is pulled off) then I get 12.35V. I think the difference from battery voltage of 12.60 represents the resistance in the wires and tell tale light.

However, when the circuit is closed (i.e the bullet is put back) the voltage at the same point is 9V. This is due to the resistance of the HRW dragging the voltage down. Surprisingly (to me) it drags the voltage down all the way round the +ve side of the circuit. And going from my experience it is more marked the closer to the HRW one gets.

The effect appears to be quite normal, and is discussed on Paul Hunt's website here: http://www.mgb-stuff.org.uk/electricstext1.htm#hrw

That means I can get on with some other garage based self-isolation tasks!
1973 MGB GT
Mallard Green / Autumn Leaf
Top

Just remember the joints should not get warm Tom.

Hi Tom
Just had another look at the Wiring diagram for your car year. The HRW gets it power via a separate In line fuse located just below the normal fuse box. Might be worth checking and cleaning the contacts as any resistance wont help your volts drop.
the headlights on the MGB also suffer from the Volts drop problem so most people fit a relay to feed the lights and use the switch etc to control the relay coil. Might be worth considering this for the rear screen.
best regards
Mike Barclay
Top

Thanks for the tip Michael, but having investigated I see the feed to my HRW switch is a Green wire whereas the ones attached to the inline fuse near the fuse box are White/Green and Green/Pink.

That accords with the wiring diagram for 1972/73 at Autowire (page 15) http://www.advanceautowire.com/mgb.pdf

The inline fuse isn't even shown on the diagram in Haynes (p.195) - but it is described as "typical" which I guess means that production changes were made with surprising (annoying) frequently at the factory!
1973 MGB GT
Mallard Green / Autumn Leaf
Top

Hello Tom
Sorry I think I may have mislead you. Have now looked at the wiring diagram again for the 1992/93 car (My manual has 17 wiring diagrams!!),you are correct with regard to the inline fuse. This is for the wiper motor/heater motor.
Looking at the correct diagram the feed for the HRW starts comes from the fuse box as a green wire. This goes into a 4 way bullet connector under the dash feeding the Voltage stabiliizer, flasher unit on route to the HRW switch. The return wire from the HRW is a Green/ Black wire and this emerges in the bunch of bullet connectors under the fuse box before heading via the rear loom to the HRW. My diagram suggest there are further 2 bullet connections at the rear. these along with the weak switch contacts will all contribute to a possible volts drop at the rear screen. Given the currents involved you will not need much in the way of a poor connection (0.5 ohm) to cause the voltage drops you are seeing. Don’t forget the electric in our cars are no around 50 years old and putting high current through old switches and connectors is always going to be troublesome. I would suggest fitting a relay and running a separate feed from the battery (Not far from the rear screen) to handle the high current and use the existing wiring to control the relay coil.
Best of luck and sorry for the confusion.
Mike Barclay
Top