Hi all,
This is the first B that I've owned and worked and my intention is to do a thorough overhaul to get a car that's reliable for touring etc. I'm going over everything on the brakes, suspension etc replacing anything that is worn, broken or likely to fail in the near future.

I thought replacing the fuel lines would be straight forward, so ordered the pipe kit from a reputable supplier I've used several times. Came to fit the pipe that runs from bulkhead under the car back to the pump and found it was too short. Also, it had no union nut at the rear end.... Then I noticed my car has an in line connection next to the battery box and the second section runs up to the floor of the boot floor...
Thinking I'd been sent the wrong part (it can happen apparently

) I called the supplier and they went to the trouble of measuring the pipe length. It matched to the one I'd been sent and they said it was the standard length that they send out.

It was only after trawling through other sites it dawned on me that my fuel pump seems to be located unusually fully in the bottom of the boot.

I've decided to leave well alone as the copper pipes seem to have a lot of work done on their installation, but I'll replace the banjos seals etc when I fit the new SU electronic replacements.

Just wondered if anyone else has images of their fuel pump location in a GT? Any tips too for replacing the pump and connections, seals? 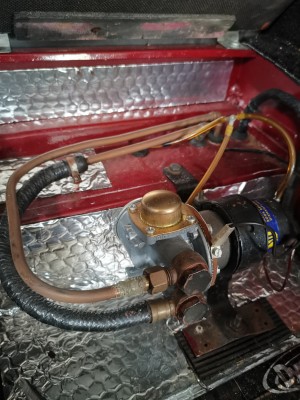 Hi Karl,
I'm not sure what year your car is , but from the introduction of the RB cars in 1974 the fuel pump was mounted through the step in the boot floor at right angles to how your pump is shown & by the looks of it slightly to the right of the bracket bolted to floor. On earlier cars the whole pump was mounted on the same side , but bolted to the car body on the heel board adjacent to the front of the leaf spring. As you appear to have a modified set up it is clear why a "standard" fuel line set didn't do the job! (I changed all mine to copper many years ago & i recall having to specify whether it was RB or earlier).
Cheers,
Charles
1980 Roadster
Top

Thanks Charles, much appreciated.
Top
Post Reply
3 posts • Page 1 of 1