Hi
I would like to replace the original static seat belts in my 74 MGB roadster with inertia belts. Looking on the internet most of the main parts suppliers sell seat belt kits suitable for my car. They all state fitting instructions are included, but frustratingly they do not provide a facility to down load the instructions to see what is involved in the installation. What does seem clear is that inertia belts require a fixing point on the rear wheelarch. My car was built in Nov 1973 so when I removed the carpet I was expecting to find a factory fixing point - Nothing, but looking at the wheelarch panel (see picture) it shows a round area that looks like it was designed or is suitable for a mounting point.
I understand that later RB cars had factory fitted inertia belts and looking at the BMH website they show a “Mtg boss assembly seat belt”, part No HZA3931 which can be welded into the wheelarch.
So before I commit to drilling and welding, I would welcome some information on the position of the mounting point on a RB car or the suitability of using the area shown in attached wheelarch picture.
Best regards
Mike Barclay 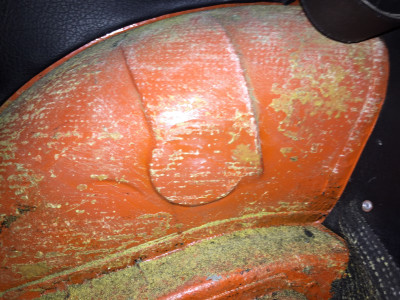 I found this on the web Mike,

definitely needs to be welded in - not the best picture but it might give you an idea of placement. 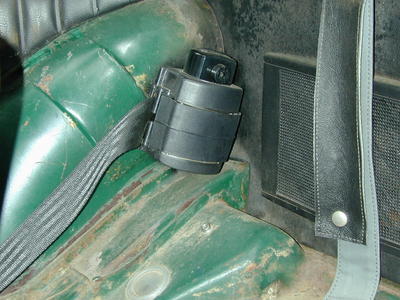 Unfortunately I cannot get to mine to take a photo - in a small garage with the top up :0(

Michael, I guess you will already know this, but there have been issues in the past over installations which did not have the correct orientation to permit self locking of the belt when required.
Most standard installations have the reel placed fairly high up on a door pillar - not possible on an MGB of course.
Ian F
1972 BGT, Blaze, Navy trim, recessed grill
1961 Midget, 948cc, Clipper Blue, Blue trim and weather gear
Top

I fitted Securon inertia reel seatbelts to my B. You have to drill a hole in the wheekarch and they supply a substantial strengthening plate for the inside (wheel side). The single large fixing secures them both this and the seatbelt unit. Its never going to rip out. I've run 185 tyres and they didn't catch on the nut.
Last edited by Paul Hollingworth on Sat Dec 19, 2020 11:33 am, edited 2 times in total.
1971 MGB roadster & 2006 MGTF
Top

Hello Ian and Paul
Thanks for your feedback. I was looking at the Securcon seat belts as they seem to have an adjustment to allow operation at different angles. However from what I can see, they need an additional bracket to allow them to attach to the wheel arch. What I can’t find is any information where to drill the hole to position them on the wheelarch. Paul would it be possible to post a picture of your belts. I was also hoping someone on the register could post a picture of the seat belts in a RB car.
Best regards
Mike
Top

My roadster is undergoing restoration at the moment so I was able to take this photo of how the Securon belts fit in my car. The hole is shown circled and you can clearly see the bracket that allows the belt reel to sit horizontally. There is a large square steel plate on the other side of the hole in the wheel arch as Paul mentioned, possibly 3 inch square although that's a guess. The only downside is that the belt is slightly in the way if you want to fold the hood right down, but since I never detach it from the rear tear drops, it doesn't bother me. 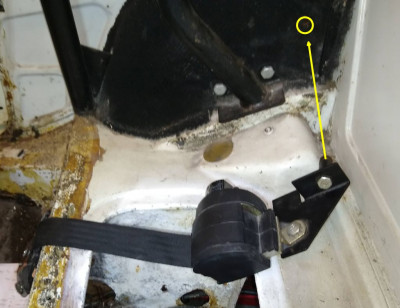 Hi Mike
Thanks forthe picture most helpful. i spoke to BMH and they measured the position of the seatbelt mount in a new shell. They have confirmed it is 1.75"from the rear bulkhead and same up from the chassis rail.
Thanks to all for your help.
Best regards
Mike Barclay
Top
Post Reply
7 posts • Page 1 of 1