Re: Some details of Gerry Brown's FIA MGB

Thanks for sharing this online, I think you may have sent it to me directly but it's good to have it centrally stored and others can see it.

I don't suppose you have or took any closer pictures of the interior do you? I'm nearing the point of adding rally equipment to my car such as extra lighting for the navigator, trip meter, clocks etc. There are many variations around so I'm trying to decide on the best layout for us.

Re: Some details of Gerry Brown's FIA MGB

Hi Tom,
I only have the picture that was in the article, and I've attached here a higher resolution version of that so you can see the detail more clearly. 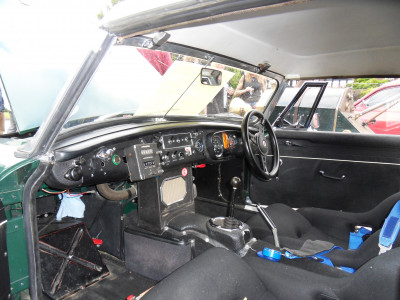 .
I do wish now that I had taken more pictures at the time. I can and a bit more detail though. The glovebox lid has been replaced with a sheet metal cover and the Halda is mounted on that. There are no clocks/watches permanently mounted in the car but the holes to the left of the Halda suggest a variety of 'extras' have been mounted the at times. The map light/courtesy light has been moved onto the glove box cover and an addition horn button is where the light was. I don't remember seeing a flexible map light in the car so perhaps the navigator used a Potti for illumination or fixed up their own flexible light if they wanted one.
The foot rest is from an MG TD/TF from the 1950's. I have one in my car and they can be found on eBay for around £30 secondhand, but they are also available new from B&G or Moss. Seats are Rigard seats with 4 point racing harnesses - Gerry always preferred the American type with a lever release. The fire extinguishers are fitted in front of the seats and the FIA cutout is mounted on the side of the footrest. The car now only has a rear cage - the front part might have been damaged in the roll Gerry had in Belgium - and I have seen a picture of him competing in that event and the crew are wearing crash helmets suggesting it was a Stage Event.
The blanking panel for the radio has been replaced with sheet metal and us used for the light switches, and I think 1 is for the usual car lights, and the other 2 are for the auxiliary front light (one for each). I've done this on my car as well, but I've kept the normal pull switch for the car lights.
I also have an article from Classic and Sports Car magazine about Ron Gammons' car JYF 770D which I'll scan and post separately.
Hope this helps!
Pete
Pete
1969 MGB Roadster
2020 MG HS Exclusive
2007 Mercedes SLK
Plus 34 other cars since 1965
Top
Post Reply
3 posts • Page 1 of 1

Return to “MGBs in Competition”