Can any help decipher this engine number ?. It is a 1970 Glacier White GT for sale here in Australia but does not conform to the normal id ranges ( 18V) for this model.

Hi Garry,
I have asked Thomas is Oz to see if he can assist with your query.

Someone in the UK might have the answer also.

If I hear anything I will let you know.

All MGB GT cars in Australia were fully imported, so the engine numbers should very closely follow those of the UK cars. Even the Australian built MGB roadsters used fully imported engines, so those engine numbers too will roughly follow the UK cars, but with more variation due to engines being fitted to cars being built somewhat haphazardly.
As you probably also know, the early three bearing engines were 18G, (18 = 1800cc, G = MG), then 18 GA (3 bearing, positive crank case ventilation), 18GB (five bearing), 18GD (first Mk II) then the 18V series. "H" indicates high compression ratio (vs L) and H should follow "U". U I seem to recall indicates a floor (vs a column mounted) gear change. So the given engine number seems incorrect; no "G" for MG, U not followed by H, and as the poster states, by 1970 they were fitting the 18V engines.

Hi Paul
Looked through all my books but can’t find an 18U engine listed for an MGB. As you mention, is it possible the V has been mistaken for a U? As Vic states the 18V780 was fitted to early rubber bumper cars and built to ECE 15 emissions regulation with HIF carbs, AAU needles and 25D Distributor. This was just before the big change to the notorious 45D 41610 distributor and weak ACD needles needed to pass the emission tests.
A picture of the engine plate might help.
Mike Barclay
Top

Thanks for the replies ... I think it may have been a rebuilt block and renumbered. Attached is a photo. 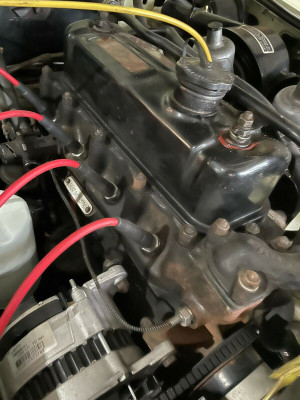 The owner does not
Top

I can't imagine that designation being changed, unless "U" means " down under"