The first week of GT ownership

The first week of GT ownership

Hello everyone, I'm new here and having spent some time perusing the forum both pre- and post-purchase, I thought I should, at the very least, say hello.

This isn't my first foray into classic transport, or classic cars specifically, but it is my first MG. As a callow youth, I owned various cars which could be described as classics, although at the time, most were simply old bangers - my Mk1. Escort Mexico always was a desirable car, although I cannot imagine getting one for £375 these days. I learnt to weld on that car, and lots more besides. I ran it on the road for slightly less time than it took me to get it through the MOT - I spent 9 weekends laying on my back covered in what-used-to-be-metal and with a pounding ARC welding headache before getting that ticket. 6 weeks later, it was on it's roof on a roundabout in Milton Keynes, with most of a Vauxhall Cavalier in the back seat. Happy days!

The Hillman Imp and Mk3 Cortina were similarly interesting and all three are well out of my price range these days.

Those days went, with them, batchelorhood and the single life. As a married IT engineer, many years of soulless company cars came and went, family was born and raised, and I rekindled my interest in motorbikes and a number of classic Brit bikes (as well as some Japanese classics such as a Z1 and a 350 LC) came to the garage and, as is the way with these things, went.

Recently, I was advised by somebody who really should learn to keep their opinions to themselves (my doctor) that two wheels weren't really a good idea. Unfortunately, she said it in front of Mrs. Browne. And so, the motorbikes went. As did four or five pushbikes, a stationary engine and some vintage lawnmowers, amongst many other things.

All of which left a suspiciously car-shaped hole in the garage. You know what's coming, don't you?

My shortlist, well, wasn't. The only thing short about it was the length of car I could reasonbly fit into the garage. It's a big garage - 2.5 cars wide and longer than the norm. Sadly, a little-known but oft-experienced adjunct of Parkinsons Law sprung into action when we bought the house 20 years ago, and sanding benches, saw-stations, sharpening station and a lathe take up lots of space around the edges, so I was restriced to around 14 and a half feet of space.

Into that space can fit (in no particular order) a Triumph GT6, a Herald, a Spitfire, a Vitesse, a Moggy Traveller, a Series 1 Land Rover, a Midget or a GT.

I looked at a number of cars. The Triumphs were all a bit tight for shoulder space. Ditto the Landy. I never got to sit in a Traveller, but the Midget and GT were both comfortable enough. I really wanted a hard top, and so the short list finally became very short indeed.

Over the past few months I've travelled the length of the country looking at GT's in dealers, on people's drives and anyhwere else they may reside. I love a tinker and I'm more than happy to fettle oily and bolt together bits. I'm quite handy with wiring and electrics don't especially scare me. Bodywork, however, is another story. I can do it, but prefer not to. Those early days of Escort ownership have left their scars and the one big lesson I learnt is that rust is like an iceberg. The stuff on the surface is a very small percentage of what is actually there. Oh, and it's best avoided at all costs.

I've seen good GT's which were too expensive for the amount of corrosion they contained, I've seen terrible cheap ones and I've seen expensive death traps. One in particular was described as in very good condition, just a small patch of rust on one wheelarch by the owner. Mrs. B and I left home early one Sunday morning to travel to the West Midlands to view that car, and when we arrived, I didn't want to even get out of the car. I could see from the roadside that it was a rotbox. Every wheelarch was corroded, the trailing edges of the front wings were one decent deluge away from dissolving. Every seam was bubbly, and when I opened the doors, I couldn't close them. That'll be sills and castle rails then. The owner started it for me and I struggled to have the owner hear my requests to turn it off over the noise of the big ends. Would you like a test drive? He asked. I politely declined.

This Monday I finally found the one. The one being a 1967 GT in mineral blue. Not perfect, but not much in the way of rust spots. Non-standard LE wheels (which I will swap for standard steel ones at some point), a conversion to telescopic dampers at the back with some meddling inside (inertia reel seatbelts, lots of interesting modifications to the centre console). The engine seems good and strong, the gearbox is more noisy than I would like, the steering was interesting on the way back and the brakes (with added servo) are a little more spongy than I'd like, but that may be normal, and something I need to adjust to.

There's a list of jobs, on top of the ones mentioned above - the headlining is a little saggy (and it has a Webasto, so not the easiest tidy-up job), the sunvisors are puffy and need work, and I've ordered a new gear-knob, an ignition lock, new knobs for the map light and fresh air vent, a replacement switch for the electric washer pump and a few other bits and pieces. They should all be here this weekend, so I'm hoping for a relaxing weekend fettling in the garage.

I did (I hope) cure the interesting steering tonight - the drivers side front wheel, when I jacked the car up, was a bit knocky. Removing the wheel was interesting and I'm so pleased that I first attempted it in the garage - how tight is it possible to do up wheel nuts? My impact driver was absolutely inefectual, and it took a three-foot extension on the wrench before I could even persuade the nuts to move. I've been around and remedied all of the wheels.

That task complete, I whipped the bearing out, cleaned it, regreased it and tensioned it properly - no knocking, still spinning freely. I'm happy with that.

I've also inflated the tyres slightly more than recommended - 28PSI ish. Hopefully the steering will feel slightly better when I'm next out. If anybody has good experience of a particular tyre pressure on an LE wheel, I'd be delighted to be advised.

So, here it is, in all it's glory. I suspect I will give it a name one day, but I haven't done that yet.

My name is Richard and I own an MGB 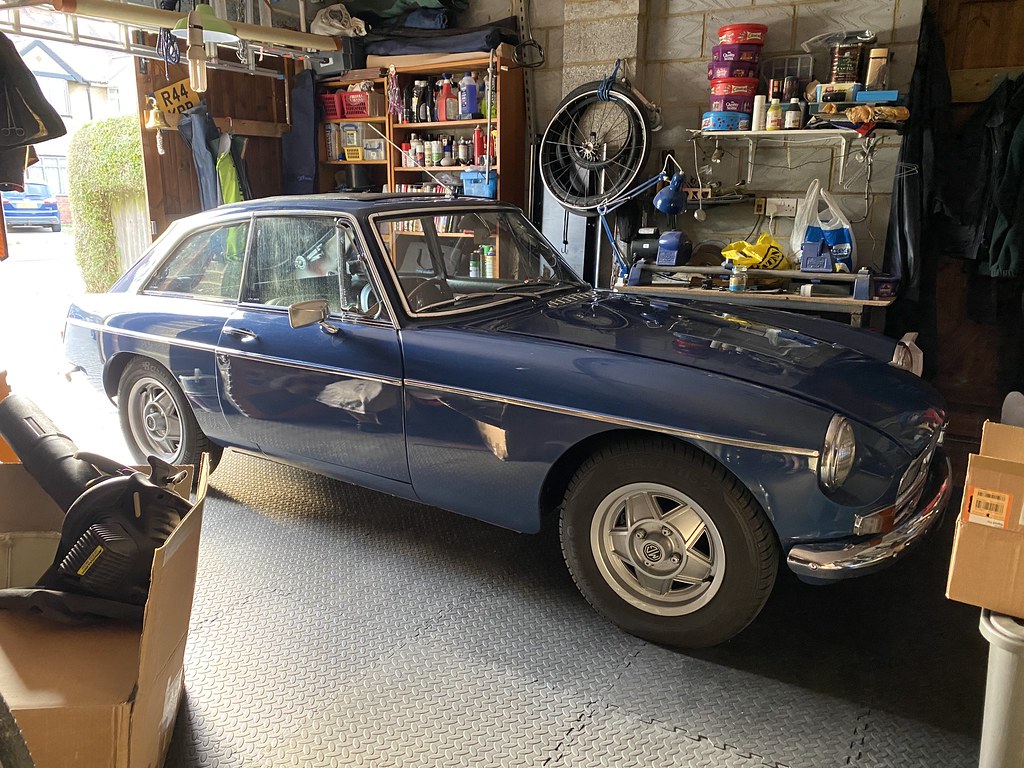 Very Nice Richard,
I can send you a scanned copy of the original MGB workshop manual if you like.

Just send me an email webmaster@mgb-register.org

Welcome to the MGB Register, don't forget to add your GT to the register if you haven't already.

Thank you for the reply - I didn't know that the wheel nuts were different, is it just the outside that's bigger (they do seem huge!) or is the thread a different size also?

I see you're in Milton Keynes - I'm a Newport Pagnell lad myself, so local to you.

I shall send a mail and also register the car as suggested.

I believe the studs are the same but the nuts are larger than usual for that type of wheel.

I work out of NP

Your car looks really nice but I agree that the LE wheels look odd on a car of this vintage. I've got Minilite replicas on my 71 roadster because I didn't like the original Rostyles. I would have preferred wires but I don't trust the conversion kits after my friend had one come off on his Midget. Swapping axles would be a big job.
I use 28 psi all-round but the steering is still a little heavy, perhaps because I have 175/70 tyres. (speedo reads not too bad)
1971 MGB roadster & 2006 MGTF
Top

For wheel nuts I think you have to be careful and check exactly what is required.
For steel wheels and some alloys the wheel nut is conical and sits inside a similar recess in the wheel.
I believe that some alloy wheels require "flat" based wheel nuts rather than the conical faced ones.

I only have original steel rostyles so am open to correction!!

Hi Richard,
If this works and you prefer Dick it should now display correctly.

I’m happy with whatever you call me Paul - I’ve been called worse!

The nuts are conical and much the wheels perfectly so I’m sure they are the right ones, but I will search out some original Dunlop steels at some point. I’m heading to the restoration show at Stoneleigh next weekend, so fingers crossed.

Today I have mostly been aligning the drivers door and repairing the drivers seat. The door now fits reasonably well but won’t lock… tomorrow I shall fix the lock and also the heater valve, following a chilly test drive today.

Did I mention I was looking for so,etching to tinker with?
Top

Probably too much information, but this is a reasonable guide:

There are three main seating types for both wheel nuts and wheel bolts. Knowing which is right for your car and wheels is important for ensuring a correct and safe fit.

Please be aware that we strongly advise against using nuts or bolts with the wrong seating type and it’s vital to always double check you’re using the correct parts.

Different brands can sometimes refer to different seating types by different names, but we’ve included the most common terminology below:

This is a popular seating type for OE (Original Equipment) or factory fitted wheels, plus aftermarket wheels which are designed to work with your original bolts or nuts. Popular vehicles which use radius wheel bolts and radius wheel nuts include: Volkswagen, Audi, SEAT, Mercedes-Benz, Skoda and Porsche.