Hi Tom - we cant tell from the picture whether its an 18G engine or the 18V which came in at the end of 72. It certainly looks identical to mine in every feature including the disposable cartridge oil filter. I've just spoken to my friend Brian (Pete knows him) who has owned his 1970 B for 40 years and he says it too had a disposable cartridge when he acquired it.
1971 MGB roadster & 2006 MGTF
Top

Paul, my 2 parts lists are genuine factory BMC ones issued to dealers not some cobbled together cheapos from the internet. 18V engines appeared from car 258001 in about 1971 and they had the spin on filter and were painted black. The inverted replaceable element filter was introduced for 18GD engines and ran to the end of the G series.
It was easy to convert to a spin on filter which I did on the 18GB engine in my previous BGT as the parts were available through dealers.
If I'm proved wrong I'll take it on the chin.
The other parts list I have is for late rubber bumper B's only.
1977 Stage 2 MGB GT
1975 SWB Series 3 Land Rover with a later 2.5 petrol engine
Top

I can't resist throwing in a couple more facts (derived from looking at engines) just for the fun of it!

# My original 18v engine in my 72 BGT has "1800" clearly visible on the block, and has the plate covering the mechanical fuel pump hole.

#My spare 18GB engine (referred to earlier) has "1800" on the block also, and no aperture for the mechanical fuel pump (of course).

So a little discrepancy over what has been said earlier in this thread (which could go on for ever!)

Hi Guys
Just to add my input. I have a 74 B (owned for 41 years) with an 18V582 engine. Original, never been painted etc. The block is black but would say more a satin rather than matt. Rocker cover is gloss.I Guess any paint would have to be High temp type.
Best Regards
Mike Barclay
Top

I don't know if we can ever settle the disagreement about the oil filter, either Vic or myself could be right. Obviously there is a discrepancy in the information coming from the factory. I wonder if the information from the parts suppliers is based on what they are seeing in the field. This is what Moss say - ambiguous or what. My engine is a 1971 18GG. According to my 1970 factory manual 18GF, 18GH, 18GK are covered in supplement AKD7957 which I don't have, but it suggests that they have emission control equipment which I don't have either. 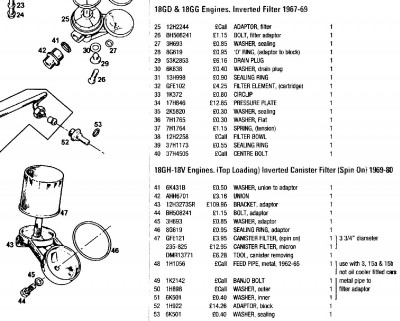 This seems to have strayed quite a long way from the question that Mario originally asked, which was what colour should the engine in his 1972 B be painted. Along the way many MGBs will have had engine changes usually when a replacement has been bought from a re-conditioner or second hand. It would therefore seem to me to be unlikely that an engine can be positively identified by the oil filter it has fitted. My own roadster now has the inverted canister type fitted to the engine. Why - because the replaceable cartridge filter drains down over a period of time so when the engine is started on choke it runs at a fast idle with now oil pressure for (quite) a few seconds. The canister type have a non return valve (if you buy the correct one) and now I have nearly instant fuel pressure on start up even after the winter lay off.
Unless the car is concours contender, I'm not sure (or a fan of) that absolute detail is that important. Practicality is more important. I would say to Mario, (to quote the 'Stones') Paint it Black! Use the correct Black paint which I said above is available from Moss (or B&G) and if Mario wants a really nice finish give it two coats of brushed on paint and then a coat of aerosol sprayed.
My engine (seen here during the build) is now mostly painted the correct MG Maroon with some details in crackle black to hide dents and rust patches. The fan is sprayed with brake caliper yellow which is very hard wearing.
[attachment=0]New enigine 2.jpg[/attachment] 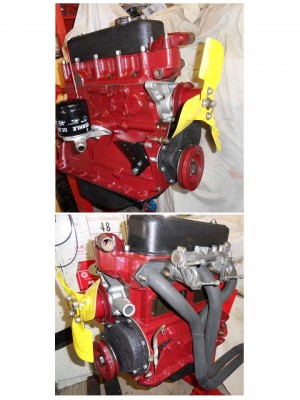 Hi all
Many thanks for your input. Apart that you always answer my questions and help me maintain my B, you really amaze me how knowledgable you are om MGs
Again many thanks