Light knocking noise in the engine.

Light knocking noise in the engine.

Easiest way to describe it is with a short video. This tapping/knocking noise is not valve clatter. You can hear it at a slower pace and mainly from the front nearside of the engine.
I see the forum doesn't embed videos, but it is on Youtube here:- https://youtu.be/QzepMKYsg24

After gradually stripping the motor and with a hint from a University Motors video I have identified it as the number 1 con rod clipping the camshaft. I don't know why but I have determined from receipts I got with the car that it had suffered a dropped valve in that cylinder and had a new valve and piston installed. It had a crank grind and new mains/big ends and oil pump fitted as well.

I've taken the that piston and rod out and find that there is a witness mark on the cam and the shoulder of the rod. Only that cylinder and only on one side of the camshaft. With the crank turning twice to every cam turn I would have thought it may scuff both side of the camshaft.

So, do I just grind back the shoulder of the rod? Do I need to balance them (bearing in mind a rod/piston weighs 1 Kg).
I am putting a new cam in anyway. 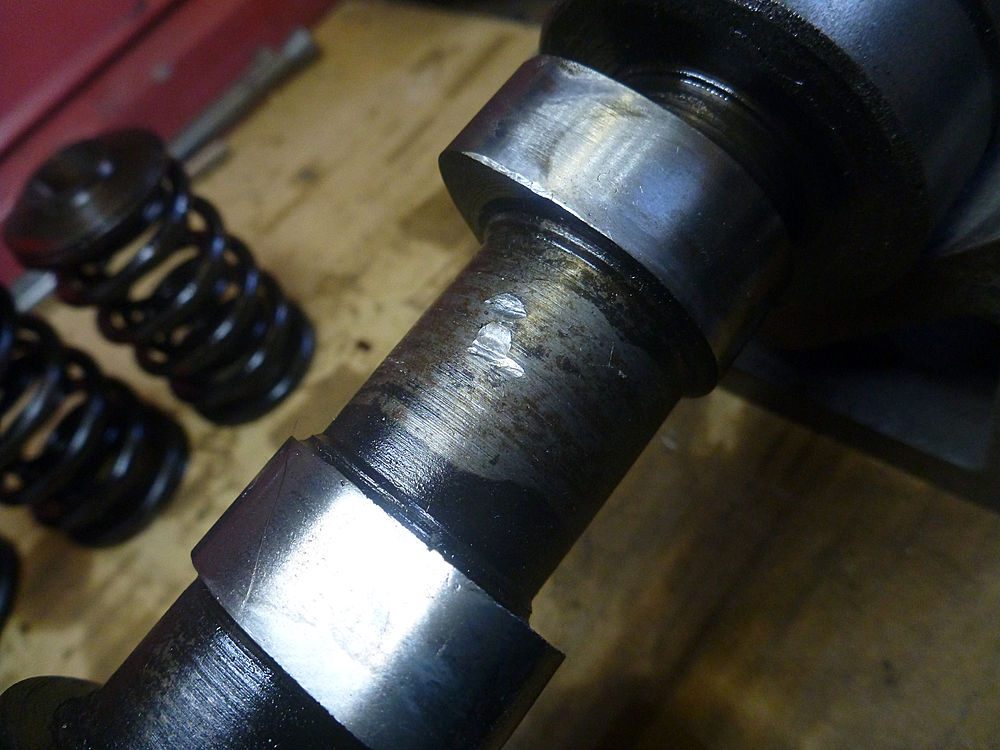 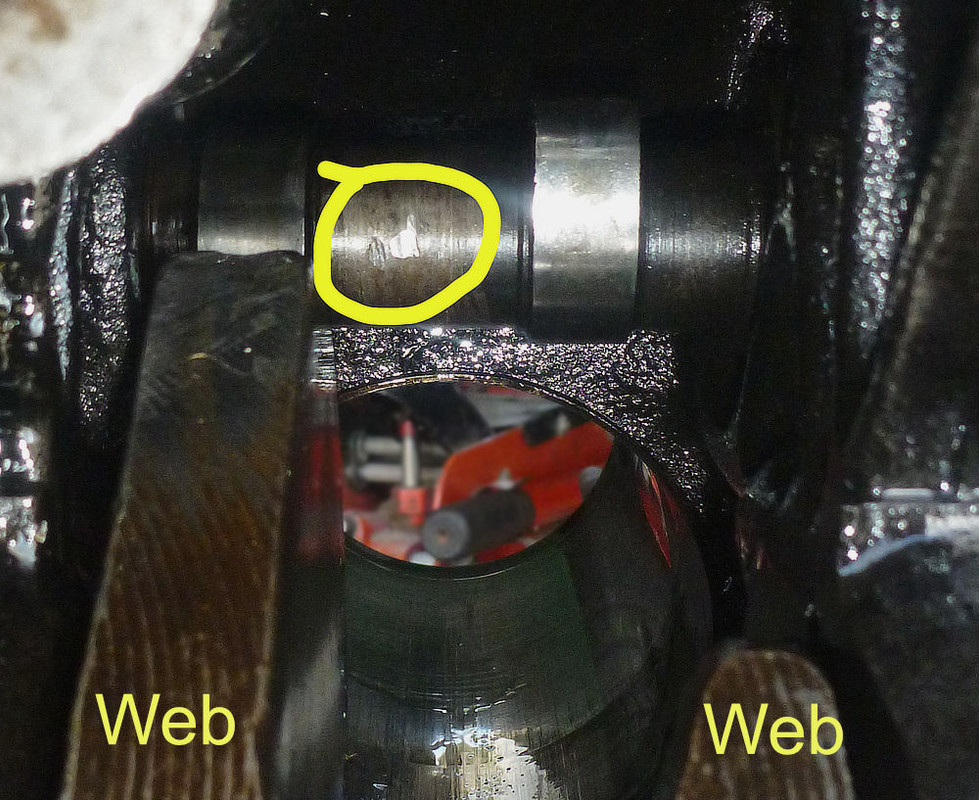 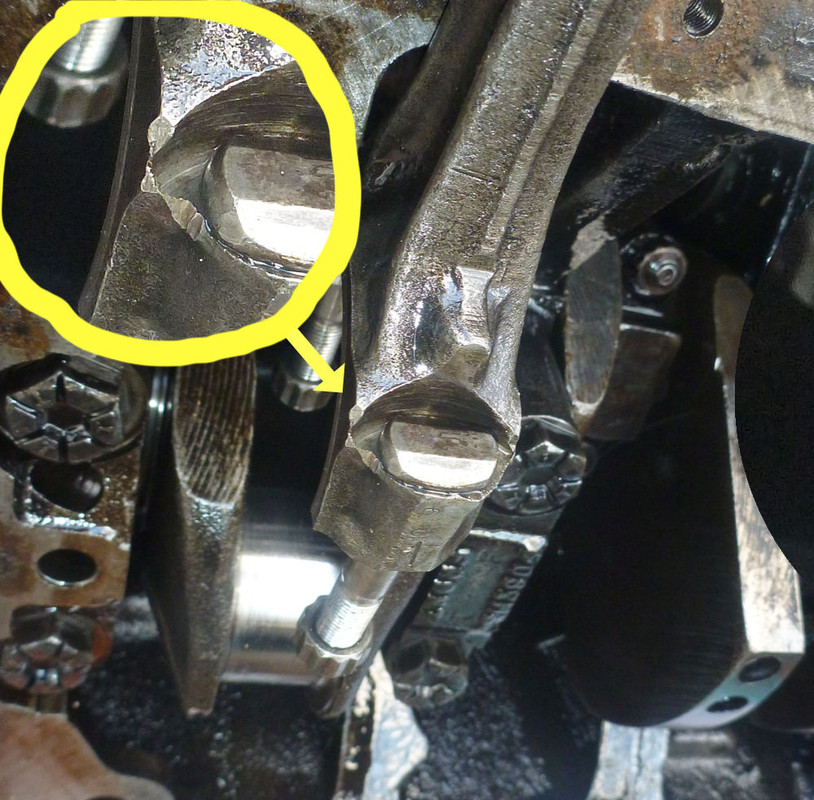 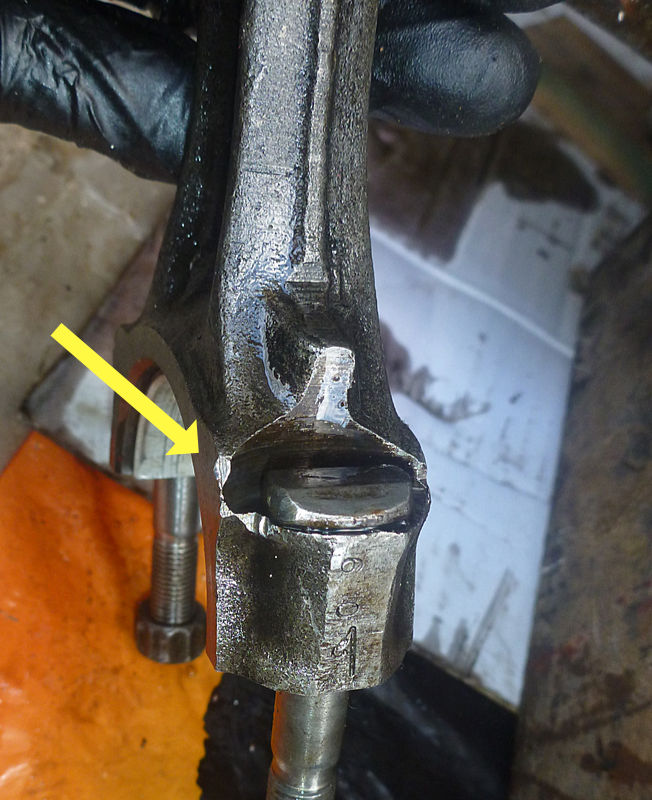 Wow - I wouldn't have expected that. The designers surely wouldn't have wanted it that close. Is your camshaft stock ? Did the crank re-grinders mis- position the big end or is the camshaft eccentric ? Con-rod forgings of course do grow as the dies wear. When you get your new camshaft compare the diameters of those parts of the camshaft. Perhaps someone on here knows what that diameter should be. ( I've chucked my old camshaft else I would have measured it). If you do opt to grind your rod be sure not to leave any stress raisers. Forged steel is very notch sensitive. (there isn't much evidence of a radius between the lobes and the shaft and you can see turning marks - poor practice).
1971 MGB roadster & 2006 MGTF
Top

It was a Gold Seal engine, apparently. It has a Gold Seal number, but I have my doubts. Things like it having an 18v block, but duplex gears and what must be a 3rd party chain tensioner (no allen key hole).
The cam does look a bit rough (it's worn anyway and the cam followers seem not to have been bedded in properly. I think it was assembled without cam lube and maybe not actually have been started for a while after building, probably without priming the oil pump).
I also think the head was not re-torqued after a few heat cycles, so was showing signs of leaking between water and oil passages.

Cam followers. Only no5 (6 actually - they got bunched up for the picture) seems to have bedded in well.

I did wonder if the cam had been a regrind, but to keep the bearing journals in-line yet end up with the shaft eccentric would be impossible. The standard rods are pretty rough bits of metalwork anyway. But I can't see why the rod is contacting the shaft now, but not before.
I have only had the car for 6 months and the rebuild (according to receipts) was in 2016, since when it has only done about 1000 miles. I think it has generally been a bit unused and suffered at each start-up from that. Having said that it has good oil pressure so I'm not keen on re-doing everything at present.
I'm not after a performance motor, just a car for meandering about in.
Top

Believe me your followers are fine, they are not scuffed or pitted at all. The marks you see are light and are typical of all used cam followers be they A, B or K series. I showed one of my followers which I considered to be pitted and had a small crack in the side wall to a Longbridge development engineer and he said that it wasn't bad for an A or B series. I've found with my engine that its the followers near the front that tend to show damage. I replaced them with genuine Leyland parts (A series type) and when I came to have the engine re-bored the workshop replaced them. All eight of them were still in good nick. I wish they had numbered them and put them back in. I changed my camshaft for an Indian job (Hindustan motors) some time ago. That apparently that was still in good nick too. I thought that it had the appearance of being Induction hardened steel rather than nitrided (factory process). Looked to be very well made unlike yours (from the photos) You can tell if yours is a re-grind by measuring the base circle diameter. Having said that your lobes don't look bad to me either. The manufacturing process involves drilling centres in the ends of the forging and then everything references those centres. You can see that your shaft has been rough turned. Everything should be concentric but the turning and grinding procesess (lobes and bearing surfaces) are obviously done on different machines. Its not unknown for swarf to get into the centres throwing everything out. Its common for B series shafts to suffer from base circle run-out making it difficult to get tappets quiet.
As I said I've scrapped the camshaft I took out so I cant compare it to yours. Perhaps someone on here could. I don't remember thinking it was badly made though. When I acquired my car it had just gone around the clock and the camshaft was knackered (front lobes worn away) as well as the bottle type followers being vey pitted.
1971 MGB roadster & 2006 MGTF
Top

The crank was ground 20" thou (I just looked at one of the shells). There is supposed to be about 1/16th" clearance (0.0625") between the rod and cam so even offsetting by 0.020" isn't going to make it that close.
It's a mystery, which I am going to overcome by just grinding off the sharp edges of the rod casting around the bolt head and polishing with a flap wheel, then installing a new cam (nicely made, from a billet).

I would hate to put it all back in and still have the tapping noise.

I had a quick look at the camshafts being sold by Rimmer Bros. The shafts were smooth and there was a good radius between the shaft and the lobes. You could also see the evidence of the heat treatment. I'd love to see a photo of a factory camshaft to compare to yours. They were forgings which is going to be inherently stronger than a billet because of the grain flow. The con-rods are also forgings.
You say that there is a 1/16" nominally between the rod and the shaft, that's 2mm. You cant see how they would ever come together on tolerance, the shaft being a machined feature. Forgings don't grow that much.
1971 MGB roadster & 2006 MGTF
Top

I had a play with the cam and crank in the block. No timing chain fitted.
There are some orientations in which the cap bolt heads jam on the cam and even the crank webs can foul the lobes.
If the timing chain were to to be a tooth out and had a lot of play there could be a catastrophe in there!
I can't imagine why a manufacture would design an engine with such mean clearances, depending on the cam timing being correct. It's not as though it was designed as a high power or lightweight engine. Reading Wiki on the engine it seems to have been around since 1954, but owes much to earlier small car and bigger commercial engines.
Top

I have to say , I am extremely puzzled by your experience with this engine! I have had 3 different vehicles with the B series engine and never experienced anything remotely like this. I have also rebuilt many B series engines.
Could it be that you have some very unusual modified components? Maybe a stroked crankshaft giving extra throw?
The cam and big ends should never be in danger of contact in my experience. I would contact someone like Peter Burgess and get an expert's opinion.

I could try giving him a call. As far as I can see there is nothing modified about it. It has standard rods and has had one piston replaced with an off-the shelf item That wouldn't fit if the crank was stroked and different pistons had been installed.
I did try this experiment without the timing chain on so I could turn the cam when the crank webs were near the cam. It's not as though it would happen in a running engine. It just seemed a complex way to design an engine, having to rely on bits not bashing each other.

Clearances in engines are much closer than you would think. I woked on an engine where the crank webs were within a few thou of striking the block casting.

Dredging my memory, aren't the con rods designed to be only way round? Could yours have been installed the wrong way round, I mean with the front face at the back? Clutching at straws here.
Mike
1969 MGB GTV8 3.9 Conversion, 1977 Triumph Dolomite 1850HL, 1971 MGB roadster undergoing restoration.
Top
Post Reply
25 posts