Hi
Attached is the timing and distributor spec information for 76 on cars fitted with the 41610. This is from the official MGB BL workshop manual.
Hope it might be of help.( sorry it didn't scan very well)
Mike Barclay 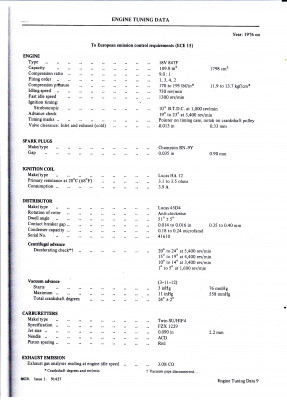 Thanks. Im waiting to hear back from Accuspark that the distributor supplied is a 41610 as the type number wasnt mentioned during the sales process or on the invoice.

Could the wrong advance curve really be causing the running on when the car is being run at idle though ? If the timing is set to book at a nominal 1000rpm any effect from the centrifugal advance mechanism would have been revealed by the timing light which hasnt happened. Im not sure how the advance curve, which only applies as revs rise and fall, could be making a difference at a steady idle speed
Top

Well done Mike. My Factory workshop manual only goes up to 1972 which is fine for my car but it means that I have to rely on Paul Hunts Bee & Vee site for data. I found the data in the Haynes manual confusing and I don't have Not_Anumbers engine number. Vic is right in that the 45D distributer came in with the HIF carbs so the take off for the Vacuum pipe is different. Its on the manifold for the HIF and on the Carb body for the HS. I'm not sure what difference this makes to the amount of vacuum seen. Peter Burgess says the advance curve 41610 is too retarded at idle and too advanced at high speed. He also doesn't like the vacuum take off position of the rubber bumper cars (HIF & 45D). Its true that the mechanical advance of the 45D is about 30 deg crank while the 25D is only about 20 deg. Also the 25D advances much more quickly and reaches a maximum just over 2000 rpm whilst the 45D doesn't peak until 6500 rpm.
My friends car we fitted the 123 distributor to has HS4 then HS6 carbs so the 40897 curve was appropriate. It had the vacuum take off on the carb body.
1971 MGB roadster & 2006 MGTF
Top

The optimum position for the vacuum take off is on the carburettor body on the sir filter side of the throttle disc. The rubber bumper cars having it on the inlet manifold was something to do with the then ECE15 emissions regulations. When I bought my 1977 BGT in 1979 it had an ECE15 sticker on the bonnet slam panel. That sticker was removed in 1981 when the current HS6's were fitted. The distributor then had to be changed because the take off was on the carburettor body. At the time Brown and Gammons were selling modified distributors for rubber bumper cars and I bought one which even on the standard set up made a noticeable improvement.
This vehicle ran on badly when I bought it do on trying to tune it out I discovered that one piston assembly on the HIF 4's had a corroded chrome tube and the jets were at different heights to get it running right. A new dashpot and piston assembly were supplied under warranty and by proper tuning the running on disappeared.
1977 Stage 2 MGB GT
1975 SWB Series 3 Land Rover with a later 2.5 petrol engine
Top

I managed to get the graph to post this morning 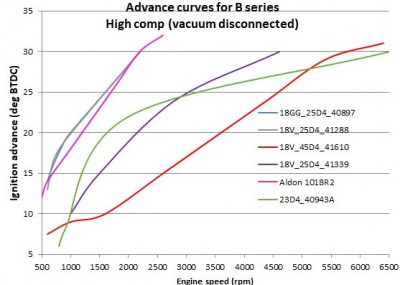 Don't forget we had to retard the ignition slightly when unleaded fuel was introduced.
Pete
1969 MGB Roadster
2020 MG HS Exclusive
2007 Mercedes SLK
Plus 34 other cars since 1965
Top

I would have thought a standard B series with a compression ratio of 8.8:1 would be happy on regular unleaded (95 RON) without retarding from factory settings. A lot of engines have been re- bored and had their heads and blocks skimmed so may be over 9:1 now. Certainly mine has, however I still use factory settings and haven't detected any pinking on regular. (I've checked my compression and its over 170 psi on all cylinders). My friend has a more highly tuned engine than me and said he thought he heard some pinking. All academic now because soon we will have to use super unleaded (97/98 RON) to avoid E10 (10% Ethanol). Often pinking is what is known as end gas detonation. This is where the flame front travels quickly enough to cause pockets of mixture to ignite independently as the pressure and temperature rise and maybe bares little relation to ignition timing. Coke obviously can set this off as it glows hot, so can running rich (flame travels more quickly through a rich mixture). Probably best just to use higher octane fuel. More advanced timing ought to give better economy and performance. I wonder if having heads gas flowed reduces turbulence so slows down combustion.
1971 MGB roadster & 2006 MGTF
Top

I had a bit of running on and pinking when my engine was new, the modern fuels don't help, I had to retard the timing slightly. It would also run very hot under load
Now it's done about 5k miles it's settled down, runs cooler and runs fine.
Top

Some great science in the replies here. The solution was a lot more basic than this,

My usual practice is to set the static timing approximately then start the engine with the distributor clamp loose so i can turn the distributor whilst pointing the timing light at the crankshaft pulley with the other hand whilst someone else handles the pedal and rev counter departments.

It turns out though that the advance control on the back of my new timing light is very easily knocked out of adjustment when the light is in use. A small piece of sticky tape made all the difference so the timing is now set correctly with the engine back running as it did before.
Top
Post Reply
20 posts