Does anyone happen to know if there is is a standard position for the aerial hole in the top of the drivers side front wing please on late RB cars?
Top

Hi Chris
I'm not aware there is a standard dimension for this. I would suggest drilling the hole somewhere between the door and inner front wing splash panel. This will allow the Aerial to retract into the wing void behind the splash panel. Might be worth removing the splash panel to get a better idea as where best to positionl the hole.
I wouldn’t recommend putting the Aerial on the driver’s side as the ignition components are all located on that side and may be more prone to interference.
Mike Barclay
Top

That's where the electric aerial on my 77 BGT is. It's on the driver's side. It's away from roadside vegetation and there's no interference from the ignition system at all.
1977 Stage 2 MGB GT
1975 SWB Series 3 Land Rover with a later 2.5 petrol engine
Top

My Roadster has rhe original aerial still in place as fitted by the factory on the driver's side. (Never had a problem with electrical interference ).
I am aware that the top of the wing seamwise & the widow frame of the gt are different to the roadster. That said, the centre point of my aerial is 71/4 ins forward from the metal foot of the window frame & 3 3/4 ins out from the edge of the seam where the wing joins the scuttle panel.
Cheers. Charles
1980 Roadster
Top 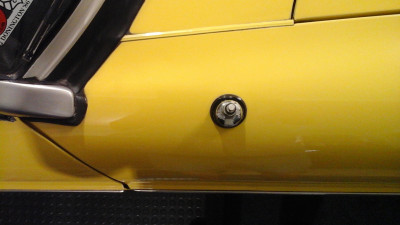 Definitely take the splash panel off to see where you are. There is a small area between the door pillar and the wing support plate and you don't want it to go there. In front of the wing support is fine. Choose your position, I don't think there is a "right" position as these would have been dealer fitted.

The aerial is on the driver's side on both my Bs and I have no trouble from ignition interference. It's better on that side as it is usually not such a temptation to hands if the car is parked in the street. Oh I know, you would always retract it - but there will be times when you don't, believe me.
Mike
1969 MGB GTV8 3.9 Conversion, 1977 Triumph Dolomite 1850HL, 1971 MGB roadster undergoing restoration.
Top

Hi
Attached below is the official instructions issued by Radiomobile to the Factor for the position and installation of aerial and radio into an MGB. I have only scanned the first page showing the for the positional dimensions for the aerial. (My neighbour us the ex chief electrical engineer at MG before it closed) . Incidently the other document he has shows for LHD cars the areial was positioned in the left wing. Have you considered fittinga DAB radio. No need for an areial hole as the aerial stick to the windscreen. Hope this helps.
Mike Barclay

Impressive chapter and verse, Michael! If you have time, I'd be interested to see the rest of the Guide. Do you know what year it's from?

Good to see that the measurement details given in the Radiomobile instructions for siting the aerial for a roadster agreed with the ones i came up with!
Cheers,Charles
1980 Roadster
Top
Post Reply
10 posts • Page 1 of 1