That looks like a very poor attempt at an oil catch tank - required for tarmac Motorsport regulations.

Generally for Motorsport the crankcase requires to be well vented and filters for fumes are often fitted, but it's important not to allow oil to escape onto the track. If the catch tank set-up is fitted to a worn engine it can allow water vapour from combustion to accumulate (instead of being vented or burnt in the engine by being fed back into the carbs). This can lead to the accumulation of "mayonnaise" in the valve cover and the venting of water vapour/oily fumes.

I would say this looks like a poorly vented worn engine. The owner should try reverting to the original factory set-up and see how that works out.

Does the car have a history of competition use? May require an engine rebuild?

I've been following this on the Facebook Page and here. There is nothing wrong with the way the breathers have been connected to the catch tank, and all of that appears to me to be working fine. The catch tank is vented using the pipe that goes down the back of the radiator, and is doing its job as there is only smoke coming out of the vent pipe and not oil and smoke. I presume the front tappet cover is the type with the oil trap and if so it is probably better to change this to the early type with just an elbow. This would allow the crankcase to breathe better which reduces the pressure in the crankcase. The catch tank is just duplicating the job of the oil trap tappet cover, so why not let the catch tank do its job. The connection into the oil filler cap is a bit crude, again using the earlier type of rocker cover with a pipe elbow would be neater.
It is also important to realise the inside of the crank case and rocker cover has positive pressure compared to air pressure. This is caused by the rotating parts within the engine, so the concept of the breather tubes sucking the fumes back into the engine is wrong - and many people on the Facebook page don't seem to realise this! The only way the engine can suck the fumes back is to connect the breather pipes to a lower pressure, which is the vacuum generated in the inlet manifold after the carburettor butterfly. On the later cars this was the two short pipes on the carburettors themselves, and on early cars it was via the PCV valve that connected into the inlet manifold.
I attach here a picture of the engine in Gerry Brown's FIA car taken some years ago. This shows more breathers and a simple catch tank vented to air 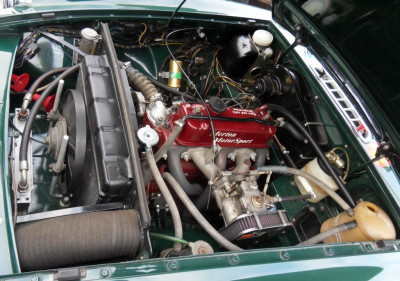 The big problem the owner of the car in the video has is why there is so much smoke coming out of the breather system. I suspect this has something to do with too much pressure within the crankcase, and oil getting into the combustion process. Unfortunately the only way to be sure is to strip the engine and examine the parts looking for the tell tale signs of oil burns down the sides of the pistons, and poor sealing on the valve stems. This obviously bad news for the new owner but there are some indications of competition use (the catch tank and the headlight covers), but the owner will enjoy the MGB much better if there are no worries about the health of the engine.
Pete
1969 MGB Roadster
2020 MG HS Exclusive
2007 Mercedes SLK
Plus 34 other cars since 1965
Top

Thanks guys,
Alex has joined the forum and I'm sure will respond in due course.

In the picture of Gerry Brown's engine above, I wasn't sure where the centre venting hose was connected. On the cover of Peter Burgess' book on power tuning MGB engines, the picture is of Gerry's engine as well, and it shows this pipe connects to another tappet cover with an elbow pipe.
Pete
1969 MGB Roadster
2020 MG HS Exclusive
2007 Mercedes SLK
Plus 34 other cars since 1965
Top

Thank you for the responses. I've only agreed a price, and not sent payment yet. I held on until I have some advice on what's happening, possibly thank god!

The gent selling it says its a reconditioned 1800cc engine put in last year during lockdown. It has a new head gasket, and when it was off he said he cleaned the valves and seats. New radiator, new hoses, new starter motor, new alternator. The routing of the hoses for the oil catch he did himself, although an unusual position on the cap, if you say its okay then it must be something internal. There's no smoke from the exhuast or anywhere else in the engine bay, just out the pipe as shown in the video. Drives well, pulls and no unusual sounds or anything when I test drove it. I'm waiting for a compression test from the owner.

It's a '77 gt and no previous knowledge of competition use, but with a newer engine I don't know then history of it. The body styling touches he did last year with his restoration.

So from what I'm getting it sounds like a worn engine, and probably replacing with another new one?

Thank you for the support!

I would say it is a very poorly executed attempt at an oil catch tank system, why it has been installed is a matter of conjecture.
The fittings look poorly executed and the tank looks way too small. For racing:

One litre minimum for Speed events.

I would perhaps speculate it's been done to disguise a worn engine, and to imitate a competition car?

Hi Alex,
I am always a bit wary of claims an engine has been reconditioned. It is often reconditioned in eyes of the owner, so unless the claim can be supported with receipts for the work. In the list of things you mention above that the owner has done last year, there is quite a lot of cylinder head work but no mention of bottom end work on crank, pistons etc. Is there a receipt for a half engine from a re-conditioner?
Something you could try is disconnect the pipe from the oil filler cap and run the engine. If it a top end problem then the smoke will come out of the end of the disconnected pipe. If it continues to smoke from the catch tank breather, then it must be from the pipe connected to tappet cover and so the problem is more likely to be the bottom end of the engine - pistons rings bores etc.
You should bear in mind that re-conditioning an MGB engine is not cheap any more, Oselli in Great Horwood now charge £2,250 plus VAT for a re-conditioned 1800cc Lead Free engine and £3,100 plus VAT for the popular 1840cc Stage 2 engine. In both cases the price is on an exchange basis. You can reduce this by around £600 by assembling an engine yourself, which show how expensive engine parts are now days.
Pete
1969 MGB Roadster
2020 MG HS Exclusive
2007 Mercedes SLK
Plus 34 other cars since 1965
Top
Post Reply
8 posts • Page 1 of 1