Having just replaced the seats in my MGB with those out of an MGF I have the original ones in the way. They are black plastic seats from a 1974 MGB roadster. Last recovered in the early 1990s using original pattern covers, new foams and webbing, but I did not recover the headrests. Complete with runners. Wood backing strips for one seat only. Minor soldering iron burn.

I am aware these have virtually zero market value. So you can have them in exchange for a donation to the Warwick District Foodbank.

The seats are in Warwick and I can take them along to the spares day at Stoneleigh (afternoon only) or to Race Retro (Saturday only).
Top

Hi David
Would you like to donate them to the Marathon MGB project?
We need to makes some seats up for the car and yours might be a good starting place.
We are at both events and might be able to transport away please call.
John
Mob 07770 575 236
John Watson
1964 MGB Roadster Mk1
2018 MG ZS Exclusive 1ltr Auto
Top

Sorry I didn't check fro replies earlier. Had a look at the Marathon car earlier this afternoon and also at the HRCR Open Day.

Very happy to donate the seats. I can bring them along to Race Retro..

Thanks David
If you could call me sometime prior to Race Retro, I have a friend who will be able to transport them.
Regards
John
John Watson
1964 MGB Roadster Mk1
2018 MG ZS Exclusive 1ltr Auto
Top

Hi
Can I ask did the mgf seats fit straight in? or did you have to modify anything as I have a '78 roadster and was thinking of
fitting a set myself

Hi James,
I have noticed most people sell MGF/TF seat as 'won't fit an MGB'. Mazda MX5 seats do fit (I have a pair in my roadster) but need a bit of modification to the way the seats mount. In the MX5 the seats have the lap seat belt mountings attached to them and a very substantial seat mounting as a result. I decided to remove all the belt mountings from the seats I bought as I fitted them. On the passenger side the MX5 seat fitted easily and lined up with the front of the runners mounting points, and I drilled through the floor to fit the rear mountings, and used the existing MGB seat belt mounting points for the belts. I also realised that the belts were not at an angle behind the seats was too steep (my B had inertia reel belts fitted to an original mounting on the side of the rear wheel arch. I've overcome this by fitting E marked full harnesses mounted through the bottom of the rear bulkhead with spreader plates in the boot. On the drivers side the offset shape of the transmission tunnel and the handbrake meant the seat wouldn't line up with the front mounting points so I attached a strip of steel to the seats and drilled this front and rear to line up with the existing seat mountings at the front and drilled through the floor for new mounting points at the rear of the seat. The MX5 seats just fit between the transmission tunnel and the sill. It is a very tight fit, and the fore and aft adjustment is more limited than with the original seats, but there is enough for me. So I'm not sure why MGF/TF seats won't fit (and some say they do!) but you need to check carefully, in particular the width of the seat. You will have to take the headrests out to put the tonneau cover on if there are no headrest cut outs but this is a simple job of seconds unlike MGB seats with a headrests. The MX5 seats are very comfortable allowing 3 hour drives easily, and being cloth they do get hot in sunny weather.
I imagine fitting MGF/TF seats would throw up similar problems
One tip though is MX5 cloth seats are a lot cheaper than MGF/TF cloth seats as nobody seems to want them and if the drivers seat if frayed on the bolster search on line and you will find seat covers off German MX5s that have immaculate passenger seat covers to replace our RH drive worn ones.
[attachment=1]seats.JPG[/attachment][attachment=0]seats and tonneau cover.JPG[/attachment] 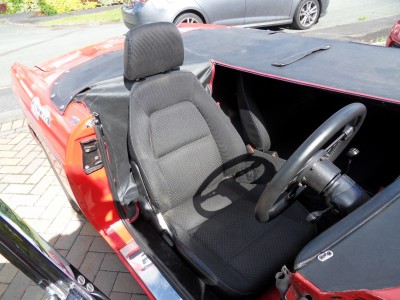 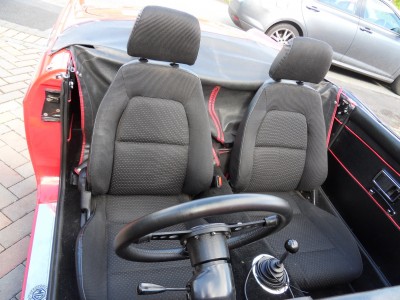 Thanks Peter for the info, I will have to look into it.
Top

Peter, I can confirm the MGF seats will indeed (just) fit as they are fitted into my car. Its not a happy installation though and has lots of caveats.

First; mine is a Mk 1 GT so has the narrow 3 synchro tunnel to give a little more width.

Second; the mounting holes are no where near aligned so extra strengthening should be added under the floorpan.

Third; even in this installation access is terrible and fitting and removing is VERY difficult.

Fourth; due to the width there is limited fore and aft movement of the seat - couple of inches at best.

I wouldn't recommend MGF seats as replacement in an MGB. I've fitted MX5 seats in the past and they are much easier to install.
Top

Another consideration, especially if fitting different seats to a roadster, is the height of the seat cushion from the floor. You want to be looking through the windscreen and not over the top of the frame. The MGF/TF was always criticised for driver being sat on the car rather than in it, whereas in the MX5 the driver sits much lower.
Pete
1969 MGB Roadster
2011 MG 6 TSE Magnette
2007 Mercedes SLK
Plus 32 other cars since 1965
Top
Post Reply
11 posts