Hi folks! My first post on this forum as I eargerly await the return of my restored 1980 MGB Roadster from the wonderful old chap who's lovingly being doing the work over the past 2 years (yes, 2 years!). I would like to install a new radio so I would appreciate some advice on any fixing kit that I would need to use for this. The radio I have bought is the Pioneer MVH-S320BT, which is the correct size for the aperature in the dash. Also, I would like to include a couple of decent small, but powerful, speakers—either under the dash or, preferably behind the seats, on either side. Apparently, replacing the door speakers is not an easy option. So, I would be so very grateful for any help & advice on these two areas. Many thanks! Steve

Hi Steve,
I have had various radio cassette / radio cd players in my 1980 Roadster which i have had from new. (The current one being a JVC radio cd player).
When i changed to the JVC i used a fitting kit from Halfords.The fitting kit necessitated filing 1-2 mm off each end of the aperture , but once the player was installed any gaps were covered.The fitting kit (basically a rectangular box has lugs on that you bend round the plastic of the lower console to hold it in place). I chose to stay with the speakers in the doors as the original doors / cards had circular apertures there. I simply upgraded the standard factory issue to some decent pioneers many years ago!
My JVC has the facility to add a second pair of speakers , but their location behind the seats is not ideal , either surface mounted or with holes cut into the boot wall. (Some have done this, but i personally don't think it is worth the effort). I also think under the dash is a poor solution , but that is only my opinion - the early MGBs did have a single speaker mounted under the dash , but that was in the days of Long & Medium wave where sound quality was not as good as now)!
I have fitted a permanent power feed (with an inline fuse) connected to the purple circuit under the bonnet on the inner wing , with the on off power to the preprepared feed that sits within the lower console , that is controlled by the ignition switch. (I have a separate in line fuse for that as well).
I enjoy my music, & provided you adjust the balance slightly between left & right when driving solo i am happy with the sound. (Roadsters are noisy when travelling at 60 + so there has to be a compromise as to how loud you want the music as well & to how good the quality of the sound is)!!!!
All comes down to personal taste & requirements.
Cheers,
Charles
1980 Roadster
Top

My speaker wires are clipped to the door hinges rather than running through a bellows type tube as on many other cars. Is this correct for a late BGT ?
Top

Yes, the speaker wire is attached to a clip as per the photo.(Apologies for orientation).
(Note the wiring colour is not original as i threaded in new wiring when i upgraded the door speakers some years ago as the spade connectors at the speaker ends were a different size to the originals (if i remember correctly) & they were already made up & nicely soldered).
Cheers,
Charles 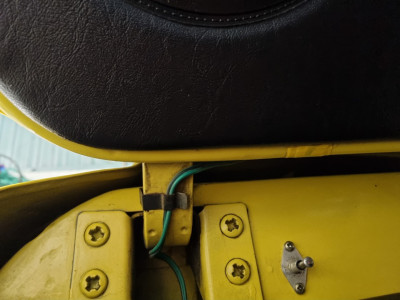