Hi Dave - If it is the early non collapsible column, not a lot holds it in place. If you take of the column shrouds and undo the screws that hold the stalk in place and let hang down out of the way. The under the bonnet, mark the relative position of the column shaft to the universal joint (a white permanent marker pen is good for this), remove the upper bolt through the column universal joint, then wedge something like a big screwdriver into the clamp boss to spread it slightly. Then from inside the car, I think you can pull the inner part of the column out of the tube. Once removed from the car you can then clamp the shaft in a good vice and hammer off the offending boss. It might be scrap when you have finished but I doubt you will car too much after all the grief it has given you. If the vice is big enough you might be able to open the slightly wider than the column diameter and let the column hang down with the back of the boss resting on the top of the jaws. You should be able to knock the shaft out of the boss with a suitable drift (keep your feet out of the way - it might release quickly and it will hurt - a lot!).
You could fit a new top bush before you refit the column as this is usually the source of up and down movement at the steering wheel, and as you refit the column be gentle as it slides through the bottom bush, line it up with the marks so it goes back into the universal joint in the same position and push home until the cutout in the column lines up with bolt holes in the clamp. Refit the bolt and do up tight, refit the stalks and the shrouds. You can then fit your nice new Motalita wheel - incidentally the are probably the nicest wheel you will ever steer a car with!
Pete
1969 MGB Roadster
2011 MG 6 TSE Magnette
2007 Mercedes SLK
Plus 32 other cars since 1965
Top

I've subsequently found a date of August 1971 for the changeover from solid to semi-collapsible columns. Like many factory records though I would be cautious, and if my B was around that date I would tread carefully when removing the steering wheel!

The Mota Lita factory is about 4 miles from me and I will be visiting it in the near future to get one of their steering wheels for my 77 BGT. A near neighbour works for them but no discount offered yet.
I'll then have to remove my steering wheel. Do the rubber bumper B's have a collapsible column?.
1977 Stage 2 MGB GT
1975 SWB Series 3 Land Rover with a later 2.5 petrol engine
Top

Hi Vic, definitely yes! Not sure which of the two types without doing a bit of a search, but I suspect it will be the later fully collapsible column. This later type is quite recognisable by just an external examination. Both the inner and outer columns are designed to collapse in an accident. If you look at the Moss catalogue you will see what this type looks like
Message is - do not use a big hammer to get the wheel off!! Make or borrow or buy a puller and save yourself some grief....

Thanks for all the advice - replacement wheel in place! 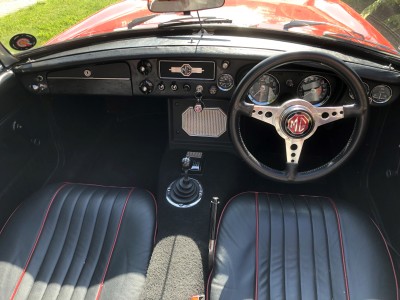