I have seen an Aldon 1950 race engine for sale but the history of it doesn't seem great. The chap selling it said he brought it a while ago with the intent of building a racer but never got round to it. He says that the engine has never been used; however im not too sure how much truth there is behind that. He's not sure when the engine was rebuilt.

Here's one of the pictures of the engine:
[attachment=0]Aldon.jpg[/attachment]

He doesn't know what its worth. What do you think its worth/what should i offer him? Or does anyone know anything about these engines? 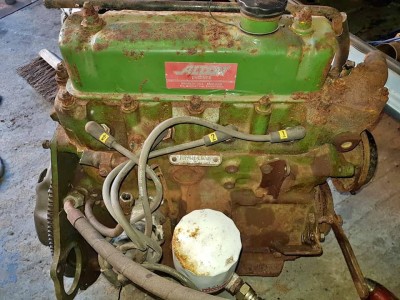 Hi Harry,
The problem you have is not knowing the state of tune of the engine, the cam it is fitted with, or indeed any idea of the overall condition or spec. of the internals. At 1950cc it will have very different pistons to a normal B engine probably Lotus Twin cam forged pistons if it is indeed a race engine. Aldon have quite a good reputation for building engines, so I would suggest the following as a means of progress.
1. Contact Aldon on 01384 572553 and ask to speak to Alan Goodwin. He is the owner and the 'Al' in Aldon so he might know the spec of the engine. If is has an Aldon Engine No. on the block he might be able to tell you exactly what it was built for and the spec. of the engine originally.
2. Ask the current owner if he is willing to remove the head so you can inspect the bores and see the valve sizes etc. or better if the engine is stripped down completely. It looks as though it has been standing about for some time.
3. You should also read this on Peter Burgess' website http://www.peter-burgess.co.uk/Choosing%20an%20engine.html
4. As to value, 1800cc engines for rebuilding are on ebay for around £200, in good condition but used they are more like £500 - £600. In this case the value has to take into account the potential value of the parts but don't get too carried away especially if you are unable to view the internals - you might be buying a few casting. A supplied built up 1950cc engine will cost around £3,000 plus vat (so £3,600).
5. I would try a cheeky bid to start off proceedings and if the seller is prepared to partially or fully strip it for viewing then adjust the price according to what you see.
I have never used a secondhand engine without stripping it down first and I have almost always found problems which would have limited its life in service. It gives you the opportunity to put new bearing in it and reseat the valves etc. As an example I bought an Austin 1300GT engine and gearbox to use in my Mark 1 Mini Cooper, as it had similar spec to a Cooper S engine. It was advertised as fully reconditioned and with the Cooper S gear ratios. On stripping it down it had one cracked piston, another had been fitted with cord rings (remember those?), the cam and followers were completely worn out and the gearbox didn't have the close ratio gear set of the Cooper S. About £1200 (plus some parts I already had) later I had a great engine! Beware!!!!
Pete
1969 MGB Roadster
2011 MG 6 TSE Magnette
2007 Mercedes SLK
Plus 32 other cars since 1965
Top

Thank you for the reply!
Unfortunately the owner/seller is not helpful in the slightest. Very blunt and doesn't seem to have a clue about the engine so i think its best i steer clear, which is unfortunate!
I pulled the engine out of mine the other day as im currently mid restoration. Im not going to be racing the car, but thought it would have been nice to add the engine if it was at a good price.
In which case i think that i will just 'rejuvenate' mine. Unfortunately i only did about 100 miles during my ownership as it basically went strait into the garage to be restored. The engine seemed sweet enough, just didnt have a great tune which i didn't bother resolving. I have a set of HS6 carbs to go on and will be looking for a fast road cam. Would you suggest I strip the engine down completely and rebuild? I know basically nothing of the history on the engine. When i drained the oil, it smelt very fumy. However it didn't look like it had been changed in quite some time so could have just been old oil.

I think avoiding that engine was a good decision. From the photo it looked very neglected and weathered, a complete strip down would be the only option I would have followed, and getting rid of all that corrosion would be a job in itself. As Peter suggested, you may have ended up buying just a few castings.
For your engine I would suggest a complete rebuild unless you can be pretty sure of the condition, as you have the engine out of the car already that's a big part of the job.