Hi folks,
I am currently reviewing a 1964 MK 1 MGB Roadster for potential purchase. I owned a 1971 MGB for 15 years and sold it in 1990's. I am having some difficulty understanding a VIN Number that is resident on the 1964 car that I am reviewing. I have attached photos for review. The VIN Number at the location that is typical for this year (per Clausager) is a number that is not lining up with typical structure of VIN Numbers for that age of car. I was expecting something like: GHN3LU then 5 numbers but it is showing, as seen in photo, as MGB 030559. I have attached additional photos that show ID Number on the body tag in engine compartment as: 30368; Engine Number as: 18GB-U-H 5326 (which tells me this is a 5 bearing). PO also notes that VIN on the bill of sale is 9224843861. Not sure where that number comes from ...

Any feedback is appreciated; I just want to make sure I'm informed and that I'm dealing with either a legitimate VIN Number, a re-shelled model or a doctored VIN number. 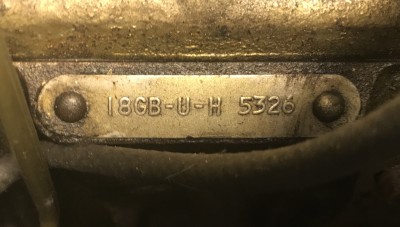 There are 3 numbers attached to Mk1 MGBs bodyshells.

Notes on above
1 The car number should be found on a rectangular plate mounted in front of the radiator on left the inner wing when viewed form the front.
As you say a correct MGB Car number from 1964 should be GHN3 followed by a seies of letters saying if LHD and or low compression engine see Clausager page 121.
2 The body number recorded in the records is on a small metal plate spot welded to the inner wing on the left viewed from the front in approximate line with the dynamo. The number in your first picture appears to be that number - 30368.
3 The Body number on this plate was fixed on either at Pressed Steel who pressed the panels or Morris Bodies in Coventry who assembled painted and largely trimmed the bodies. This is your picture 3 and is not recorded in records so MGB30359 is not a VIN number . It should be mounted and held by self tapping screws on the inner wing on the RHD side viewed from the front

MGB Records
All the MGB build records are held at the BMIHT at the British Motor Museum in Gaydon. They produce Hertitage Certifcates based on the Car Number.This will give lots of details see link.
LInk https://www.britishmotormuseum.co.uk/ar ... rtificates. .

If the plate mentioned as 1 above is missing it would be possible to trace the original Car Number from the body number but no doubt there would be an extra fee as records are in car number order - bodies were not always used in exact number order.

The number you have quoted as the Bill of Sale VIN number is not a number found at any time on an MGB. Must have given for some reason as the original had been lost by some offical body.

Thank you Sir for the thoroughness of your reply; it is very much appreciated. Being new to the forum I'm going to guess you are somewhat legendary in these circles. The information you offered should certainly assist in my journey. If I can ever return just a fraction of the contribution that you have offered me, I will oblige.

Hi Kris,
The Car Number is on plate that looks like this. It was screwwed (probably self tappers) to the inner wing, and as George says it should be on the left when viewed from the front of the car. 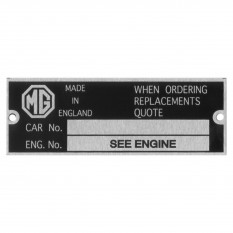